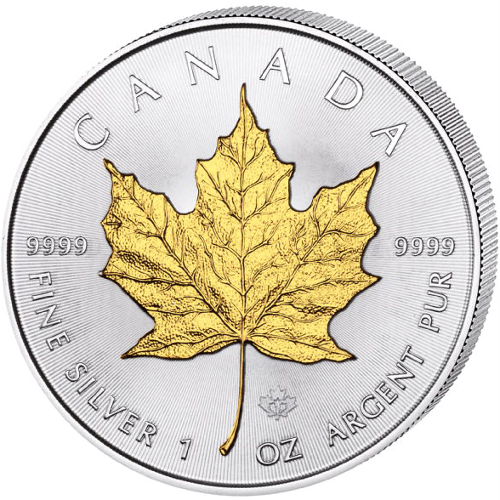 In the case of all Silver Maple Leafs that are gilded, the 24-karat gold layer is featured only the sugar maple leaf on the reverse face of the coins. The layer of gold, though impressive at 24-karat in nature, is not enough to drastically alter the precious metal content of the coin with its addition. However, it is enough to create a beautiful visual contrast between the sugar maple leaf and its surrounding design elements.

Queen Elizabeth II is found on the obverse side of 2014 1 oz Silver Canadian Maple Leafs. This portrait of the Queen was designed in 2003 by Susanna Blunt as the fourth-generation Canadian depiction of the monarch. Canadian denominations used existing Royal Mint designs from 1953 to 1989. Starting in 1990, the Royal Canadian Mint split from Royal Mint designs to feature its own effigies of the Queen. This is just the second created by a Canadian artist exclusively for use by the RCM.

If you have any questions about these silver coins, Silver.com customer service would be happy to assist you. Please feel free to call us at 888-989-7223, chat with us live online, or email us directly.