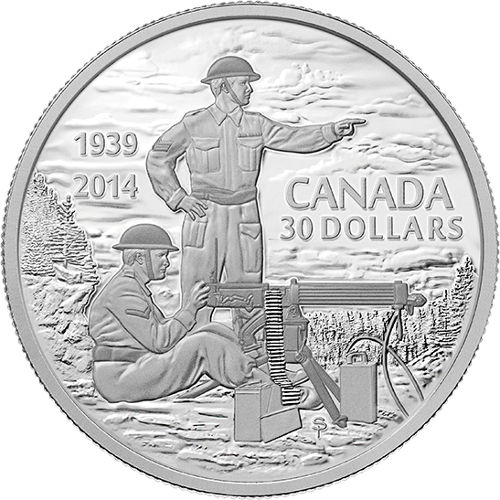 World War II was the most traumatic collision of militaries in the history of human civilization. Every corner of the globe was engulfed in the conflict in one way or another. The Royal Canadian Mint pays homage to the sacrifices and dedication of the Canadian people during World War II with the 2014 2 oz Silver $30 WWII Machine Gunner coins. Each of these coins contain two troy ounces of .9999 pure silver and have a proof finish.

This particular coin is just the second ever produced by the Royal Canadian Mint at a full 2-ounce weight. The $30 coin was minted in honor of the 75th Anniversary of WWII. While the war was devastating for the globe, the harshness of the Great Depression was brought to an end with the outbreak of war as the Canadian people transformed their economy into a powerhouse. The nation helped manufacture and deliver the guns, bullets, planes, and tanks needed to win the day.

The primary image on the coin pays homage to the training received by members of the Royal Canadian Army during the war. The opposite side of the coin bears the image of Queen Elizabeth II, as has been standard on all coinage during her reign as the Queen of the United Kingdom.

On the reverse side of the coin is an image of two soldiers training with a machine gun in the Canadian wilderness. One soldier is seated in the gunner’s position, while an instructor offers guidance. Behind the men is a scene of the Canadian wilderness, complete with cliffs and dense forests. Engravings include the word “Canada,” the face value of the coin, and the two years that indicate the 75th anniversary of the war (1939 and 2014).

The reverse side of the coin uses Susanna Blunt’s right-profile image of Queen Elizabeth II. Her Majesty’s image has been used on all circulation currency since her coronation in 1952. Blunt’s image is the third iteration of Queen Elizabeth, as images are updated to reflect her age from time to time. Engravings include “Elizabeth II” and “D.G. Regina.” Unlike other coins, there is a background of interlocking circles on the reverse side of the 2014 2 oz $30 Silver Canadian Machine Gunner coin.

If you have any questions about the 2014 2 oz Silver $30 WWII Machine Gunner Proof Coins before making your order, please call us at 1-888-989-7223. We can also be reached online through live chat and email. We look forward to speaking with you and answering any of your questions.