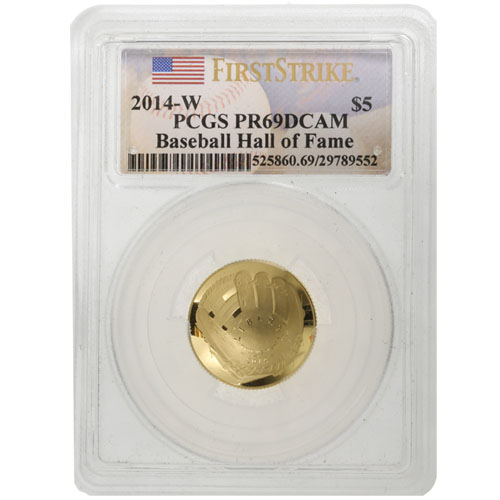 The oldest professional sports organization in the United States is professional baseball. Major League Baseball started as separate National League and American League entities that have been around for more than a century each. The 2014 release of domed proof coins by the US Mint honored this rich history with three options for collectors. Now, the 2014-W $5 Gold Baseball Hall of Fame Coin is available to you for purchase online in near-perfect condition at Silver.com.

Domed coins had never been struck by the United States Mint prior to the release of these 2014 Baseball Hall of Fame Coins. The US Mint worked with the Perth Mint of Western Australia and the Royal Australian Mint on the technical aspects of striking a domed coin. With this release, the US Mint produced these $5 proof gold coins alongside a $1 proof silver coin and a silver-clad half-dollar coin.

The obverse of the 2014-W $5 Gold Baseball Hall of Fame Coin bears the image of a baseball glove. This side of the coin is the concave surface that helps recreate the depth of a baseball glove. Inscriptions on this face include the word “Liberty,” the national motto, and the date mark.

On the reverse side of 2014-W $5 Gold Baseball Hall of Fame Coins is a depiction of a baseball, complete with the stitched seams. This face of the coin is domed with an upward curve that mimics the actual look of a baseball’s rounded surfaces.

These 2014-W $5 Gold Baseball Hall of Fame Coins earned a PR69 certification from the PCGS. Coins in this condition showcase full, original mint luster and have no more than two minor detracting flaws. Acceptable flaws at this grade level include minuscule contact marks or hairlines and are found outside of the primary focal points of the coin. Each coin also has a DCAM designation that stands for deep-cameo. These gold coins have strong, frosted elements overlaying deeply-mirrored, clear background fields that create visual contrast between the two.

Silver.com customer service is available to you at 888-989-7223. You can also connect with us online through our live chat and email address features.