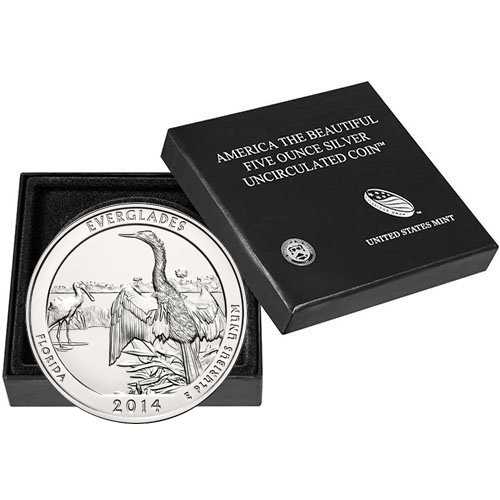 In the ATB Series from the United States Mint, 56 distinctive designs ae used to represent each one of the 50 US states, the District of Columbia, and the five overseas territories of the nation. The coins are released five per year with a schedule that runs from 2010 to 2021 in its current format. There is the potential for the series to be expanded at the discretion of the Treasury Department. Right now, 2014-P 5 oz Burnished Silver ATB Everglades Coins are available to purchase online at Silver.com.

Each one of the 2014-P 5 oz Burnished Silver ATB Everglades Coins in this listing comes to you with its own presentation case from the United States Mint. Included with your purchase is a Certificate of Authenticity from the US Mint.

The ATB Series includes 56 designs in total with two versions available for each release in the collection. The investment-grade bullion coin has higher mintage figures and is available in bulk purchase options. These Burnished Silver ATBs are available individually inside of distinctive packaging and feature lower production figures. Additionally, the burnishing process during coining of these coins results in a matte appearance compared to the shinier finish of the bullion coins.

On the obverse of 2014 Burnished Silver ATB Everglades Coins, you will find the left-profile portrait of President George Washington. The first President of the United States of America, Washington’s bust has featured on the circulating quarter since 1932 when it was placed there in honor of his 200th birthday.

The reverse field of 2014-P 5 oz Burnished Silver ATB Everglades Coins includes a depiction of an anhinga bird perched on willows in the foreground as another bird, a roseate spoonbill, wades in the shallow waters in the background.

Everglades National Park protects roughly 20% of the original Everglades region in Florida. It is the largest tropical wilderness in the United States and the third-largest national park in the contiguous US states behind Death Valley and Yellowstone.

If you have any questions about buying silver, please call Silver.com. Our customer service team is available at 888-989-7223, online through our live chat, and via our email address.