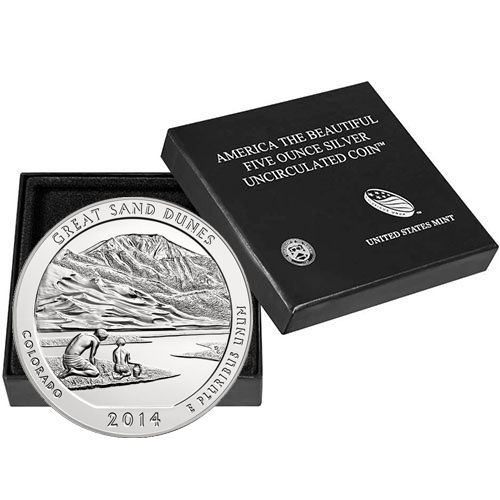 The America the Beautiful Series of silver for sale at the United States Mint includes two options for those buying each of the new design releases. The collection includes an investment-grade bullion coin and the collectible burnished silver coin. The latter has a different visual finish and lower mintage figures, both of which are ideal for collecting. The 2014-P 5 oz Burnished Silver ATB Great Sand Dunes Coin is currently available to you online for purchase at Silver.com.

Featured in the background of the Burnished Silver ATB Great Sand Dunes coin design are the Sangre de Cristo Mountains. Spanish for “Blood of Christ,” the mountains form a subrange of the Rocky Mountains that extend through southern Colorado into New Mexico. The mountains were first discovered by Europeans when the Spanish controlled this portion of North America and traveled through the region on the Santa Fe-Los Angeles trail.

The highest peak in the Sangre de Cristo Mountains is Blanca Peak, which reaches 14,351 feet into the air. Though the mountains dwarf the sand dunes in this region, it is the dunes within Great Sand Dunes National Park and Preserve that capture the imagination because of their uniqueness. This area is home to the tallest sand dunes found anywhere on the North American continent.

On the reverse of the 2014-P 5 oz Burnished Silver ATB Great Sand Dunes Coin is the image of a man and his son sitting along the banks of a small creek. In the near background, some of the dunes from the region rise above the creek. In the distant background, the peaks of the Sangre de Cristo range rise up to meet the sky.

The obverse of 2014 Burnished Silver ATB Great Sand Dunes Coins bears the effigy of President George Washington. This left-profile portrait is a refined version of the 1932 design by John Flanagan that appears on the circulation quarter to this day.

These 2014-P 5 oz Burnished Silver ATB Great Sand Dunes Coins are available to you with their original US Mint boxes and ship with a Certificate of Authenticity. The burnished coins in the ATB Series feature “P” mint marks from the Philadelphia Mint.

We encourage Silver.com customers to contact us with questions at 888-989-7223, online using our live chat, and via our email address.