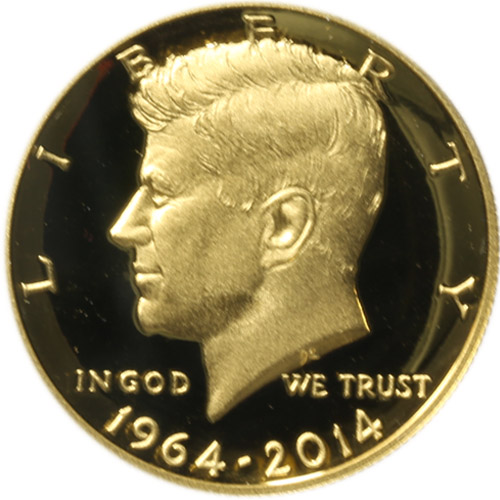 Just four months after his assassination, President John F. Kennedy’s portrait graced the obverse of a circulating US coin. The youngest man ever elected to the nation’s highest office became the fastest to appear on a coin following his term when the new half-dollar design was released in 1964 by the US Mint. In 2014, the US Mint marked 50 years for the design with a commemorative gold bullion coin. Today, the 2014-W Proof Gold 50th Anniversary Kennedy Half Dollar Coins are available to you inside of the original packaging at Silver.com.

The Treasury Department and the United States Mint moved quickly at the end of 1963 and into early 1964 to put President John F. Kennedy’s likeness on the half-dollar coin in place of the existing portrait of Benjamin Franklin. Kennedy’s portrait was designed by US Mint Sculptor-Engraver Gilroy Roberts using the image from his presidential medal as inspiration.

All of the 2014-W Proof Gold 50th Anniversary Kennedy Half Dollar Coins in this product listing come to you with the original mahogany hardwood presentation box. Inside of the box is a removable coin well that includes the individual coin with a protective plastic capsule around it. Included with your purchase is the original US Mint Certificate of Authenticity.

On the obverse of 2014 Proof Gold 50th Anniversary Kennedy Half Dollar Coins is a depiction of President Kennedy. The bust is surrounded by the word “Liberty” above with the commemorative dates of “1964-2014” featured below. Inset around his portrait is the national motto “In God We Trust.”

The reverse side of the 2014-W Proof Gold 50th Anniversary Kennedy Half Dollar Coin is a design from another US Mint Sculptor-Engraver. Frank Gasparro developed this version of the Presidential Seal in 1964 for the release of the new half-dollar design. It depicts the American bald eagle wearing the US heraldic shield on its chest. The bird clutches 13 arrows in one talon and a singular olive branch in the other.

Please feel free to reach out to Silver.com if you have any questions about buying gold. You can call us at 888-989-7223, chat with us live online, or simply send us an email.