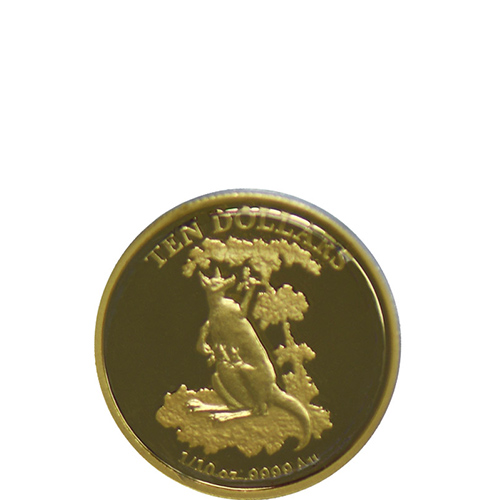 The final design of the Explorers’ First Sighting Series at the Royal Australian Mint features one of the most beloved animals from the Australian continent. In this third release of the series, the kangaroo takes center stage. Those Westerners who first sighted kangaroos were unsure what they were seeing, but cataloged the animals nonetheless for the Western world. Today, 2015 1/10 oz Proof Gold Australian Explorers First Sighting Kangaroo Coins are available to you online at Silver.com.

The first written record of the kangaroo in the Western world was cataloged on July 12, 1770. Sir Joseph Banks, who wrote about his encounter with the kangaroo at the side of the modern town of Cooktown, recorded the marsupial as the kanguru. The modern word is believed to have derived from the Guugu Yimithirr, a group of Aboriginal people from the far northeast of modern Queensland.

All of these 2015 1/10 oz Proof Gold Australian Explorers’ First Sighting Kangaroo Coins are available to you for purchase with a commemorative display. The display box offers a capsule for the coin and a beautiful wooden case. The coin and case come with a themed shipper for the series and a Certificate of Authenticity.

On the obverse of 2015 Proof Gold Australian Explorers’ First Sighting Kangaroo Coins is a depiction of Queen Elizabeth II. The longest-reigning monarch in British history, Elizabeth II is shown here in the fourth-generation design from the Royal Mint that shows the Queen in right-profile relief with the Girls of Great Britain and Ireland Tiara. This depiction came to Australian coins in 1999 and is in use by the Perth Mint and the Royal Australian Mint.

The reverse face of the 2015 1/10 oz Proof Gold Explorers’ First Sighting Kangaroos features a depiction of the kangaroo. The kangaroo featured here is shown with two joeys in its pouch as it reaches into a tree. Although Aboriginal people were familiar with kangaroos by the time Westerners first sighted them, the early accounts brought back to Europe by explorers often proved inaccurate.

Please contact Silver.com with any questions when buying gold. You can call us at 888-989-7223, chat with us live online, or simply send us an email.