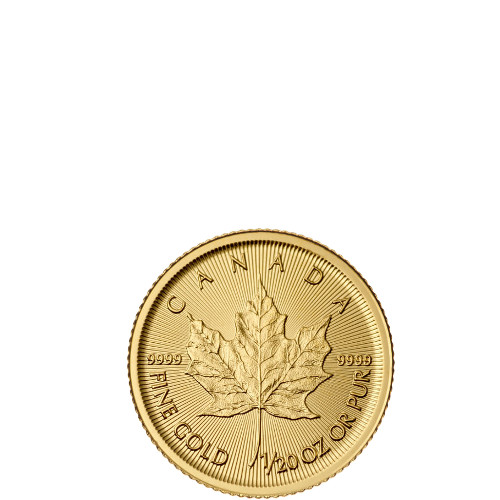 The maple leaf is part of Canada’s history. Though it is a simple piece of the Canadian wilderness, it graces the logo of national sport’s teams such as the Toronto Maple Leafs of the NHL, as well as countless government emblems and coin series. The Gold Canadian Maple Leaf is one of the most trusted bullion coins in the world. The 1/20 oz coin is the smallest in the series and today you can purchase the 2015 1/20 oz Gold Canadian Maple Leaf in brilliant uncirculated condition.

Gold Canadian Maple Leafs are the official gold bullion coin of the government of Canada. Like its cousin, the Silver Maple Leaf, the Gold Maple Leaf features the same image from one year to the next on both the obverse and reverse sides. The Gold Canadian Maple Leaf program was first launched in 1979 to meet the huge demand following an economic boycott of the South African Krugerrand during Apartheid.

On one side of the 2015 1/20 oz Gold Canadian Maple Leaf is the iconic image of the leaf itself, complete with intricate details for the lines of the leaf. On the opposite side is Susanna Blunt’s portrait image of Queen Elizabeth II. These images have been used steadily throughout the production of the coins, dating all the way back to 1979.

The very first Royal Canadian Mint facility was opened in 1908 to cope with the rush of gold discovered in the Yukon Territories. Today, the mint operates from facilities in Winnipeg and Ottawa, and has become world renowned for its ability to produce coins with incredible levels of purity.

If you have any questions about the 2015 1/20 oz Gold Canadian Maple Leaf coin or any other product we sell, please don’t hesitate to contact our associates at 888-989-7223. Our support team can also be reached conveniently by using our live chat service.