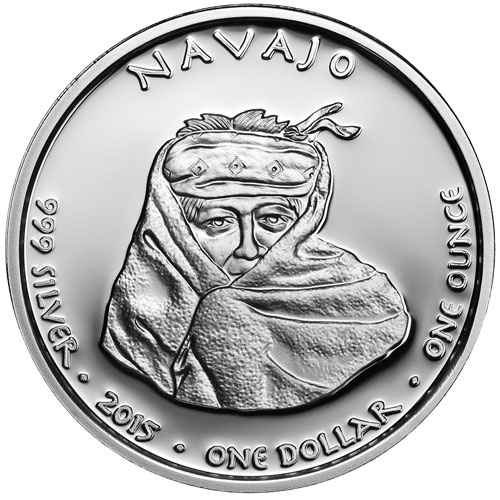 For the second release of the Native Dollar Series of proof silver coins from the Native American Mint, the second largest federally recognized tribe in the United States was chosen as the representative of the state of New Mexico. Included along with the Navajo Nation in the design is the cougar, an animal once found throughout the American West that is now limited to small, mountainous pockets. The 2015 1 oz Silver Proof New Mexico Navajo Cougar Coin is currently available on Silver.com.

The Navajo Nation occupies the Four Corners region of the United States comprising portions of Arizona, New Mexico, Utah, and Nevada. According to the United States federal government, the Navajo people are the second largest tribe in the country with roughly 300,460 members registered. The vast majority of these individuals reside within Arizona and New Mexico.

On the obverse of the 2015 1 oz Silver Proof New Mexico Navajo Cougar coin is the image of a member of the Navajo Nation, captured in brilliant relief gazing back at you as you view the coin.

The reverse side features a cougar in a seemingly relaxed pose. Cougars are one of the deadliest predators on the North American continent, silently stalking their prey and pouncing before the victim even knows the beast is there.

Please feel free to ask questions of Silver.com associates. You can reach us at 888-989-7223, chat with us live online, or send us an email.