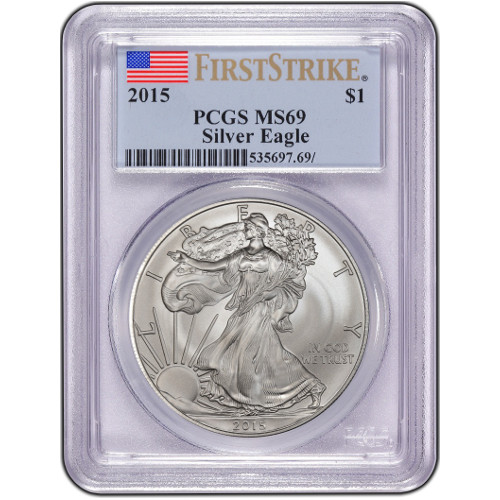 There are few symbols in the world more indicative of freedom and power than the bald eagle and the Statue of Liberty. Both of these symbols serve as the inspiration behind the design of the 2015 1 oz Silver American Eagle Coin from the United States Mint. Today, you can purchase these coins from Silver.com with an MS69 grade from PCGS as part of the First Strike series. The First Strike labels designate that the coins were received by PCGS within the first 30 days of the coin’s release.

Congress passed the Liberty Coin Act in 1985, authorizing the US Mint and Department of the Treasury to use silver from the Defense National Stockpile to produce an official silver bullion coin of the US. Since its introduction in 1986, the design on the Silver American Eagle has remained the same. Adolph A Weinman’s Walking Liberty image, first featured on the Walking Liberty Half Dollar from 1916 to 1947, is featured on one side. On the other side is John Mercanti’s image of the heraldic eagle. Mercanti was the US Mint’s chief engraver when the series was introduced in 1986.

On the obverse side of the coin is the rendering of Lady Liberty. In the image, she can be seen walking toward the setting sun. Engravings on this side of the coin include “Liberty,” “In God We Trust,” and the year the coin was minted. The reverse side of the coin bears the heraldic eagle. Sitting behind a shield, the eagle grasps arrows in one talon and an olive branch in the other. Above its head are 13 stars to pay respect to the original 13 colonies. Engravings on this side include “United States of America,” the weight, purity, metal content and denomination of the coin.

The United States Mint was founded by Congress in 1792 with the passage of the Coinage Act. Today, it is the sole producer of US government circulation and commemorative currency including the Silver Eagle. These coins have an MS69 grade from the Professional Coin Grading Service, which means they have an attractive strike and fewer than two blemishes.

If you have any questions about Silver American Eagle Coins or the online shopping process, simply call our associates at 888-989-7223. You can also speak with a representative online through live chat or email.