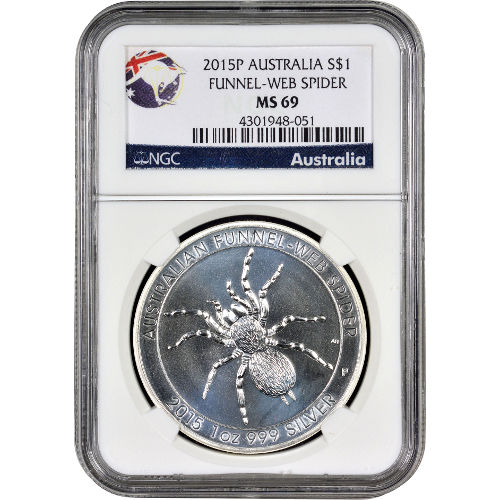 Australia is home to some of the most beautiful, and deadly, animal species in the world. The funnel-web spider is a native species of the continent, and is actually a subspecies that consists of 40 different types of spiders. Injecting one of the most toxic venoms in the world, funnel-web spiders pose a threat to mankind. The best way to enjoy one is on the face of the 2015 Silver Australian Funnel-Web Spider coin, available now on Silver.com.

Each 2015 Silver Australian Funnel-Web Spider coin in this product listing is in near-perfect condition according to the NGC. A Mint State 69 coin features its full, original mint luster, but also bears a maximum of two minor detracting flaws such as miniscule contact marks.

Funnel-Web Spider coins honor this native spider species found on the Australian continent. Although humans rarely come into contact with these spiders, the toxicity of their venom makes a bite from one of these spiders particularly dangerous for human beings.

On the reverse face of the coin is the image of a funnel-web spider in its splendid, terrifying glory. Engravings on the coin include “Australian Funnel-Web Spider” above the design and “2015 1 oz 999 Silver” below. The “P” mint mark of the Perth Mint is also featured on this side.

The obverse bears the right-profile portrait of Queen Elizabeth II. Her Majesty’s depiction is encircled by the words “Elizabeth II,” “Australia,” and “1 Dollar.” There is also an inscription of “IRB” below Her Majesty’s effigy in honor of designer Ian Rank-Broadley.

Perth Mint is Australia’s oldest operating facility. Once part of the British Royal Mint system, today it is a state-owned entity of the government of Western Australia, and not associated with the Royal Australian Mint.

If you have questions, please reach out to a Silver.com associate. You can call us at 888-989-7223m chat with us live online, or submit your questions via email.