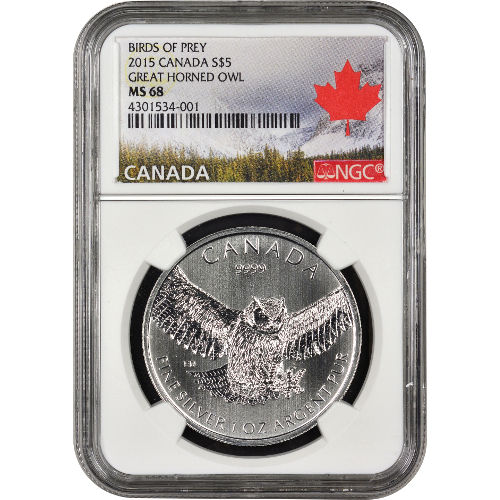 Birds of Prey coins were introduced in 2014 following the conclusion of the Canadian Wildlife Series in 2013. The popular series featured four coins released in 2014 and 2015. The coins were released in February and August of the respective years, with the peregrine falcon released first, the bald eagle second, the red-tailed hawk third, and culminating in this Great Horned Owl coin.

Each of the 2015 1 oz Silver Canadian Great Horned Owl coins available right now is in Mint State 68 condition. According to the NGC, this indicates a coin with an attractive strike, full mint luster, but also three or four minor detracting flaws. Found outside the primary focal areas, these flaws are often miniscule contact marks.

On the reverse face you’ll find the image of a Great Horned Owl, the most familiar aerial predator in Canada, swooping down on its prey. The design includes engravings that denote the nation of issue, purity, weight, and metal content of the coin, as well as the designer’s initials, “ED.”

The obverse bears the familiar right-profile portrait of England’s Queen Elizabeth II. Her Majesty’s image is featured along with engravings of her name, the year of issue, and the coin’s face value.

If you have any questions about this Birds of Prey product, or other coins in the series Silver.com carries, contact us at 888-989-7223. You can also reach out to us online using our live chat and email features.