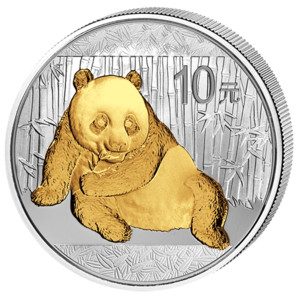 Silver Chinese Pandas were first struck by the People’s Republic of China in 1983. Although the dragon is considered an official symbol for the nation of China, the panda is commonly associated with the country by millions of people around the globe. Native to the mountains of south-central China, the panda is categorized in the order Carnivora, but has a diet that consists largely of bamboo, grass, and wild tubers.

Each of these 2015 1 oz Silver Chinese Panda coins is identical to the standard bullion coin in the series, except for one major difference. The panda featured on the reverse side of the coin is gilded in 24-karat gold, creating a stark contrast between the coin’s silver background the gilded panda. Another slight difference on all 2015 Silver Chinese Panda Coins is the absence of the weight and purity engravings on the reverse.

The obverse side of the coin bears the image of the Temple of Heaven in Beijing. Engravings on this side include the Chinese symbols for “People’s Republic of China,” along with the year of minting. On the reverse side, a lone panda sits in front of a wall of bamboo while it chews on some leaves. The face value of the coin is engraved on this side.

The People’s Bank of China is responsible for overseeing the minting of Silver Chinese Panda coins. Because the mint system does not issue mint marks on any of its coins, it is impossible to know which mints in China are responsible for the production of the Silver Chinese Panda. However, it is assumed that the major mints in Shenzhen, Shanghai, and Shenyang play a role in the process.

If you have any questions for Silver.com associates about this product or the online ordering process, we encourage you to reach out to us. Our staff members are available via phone at 888-989-7223, or online using our website’s live chat service.