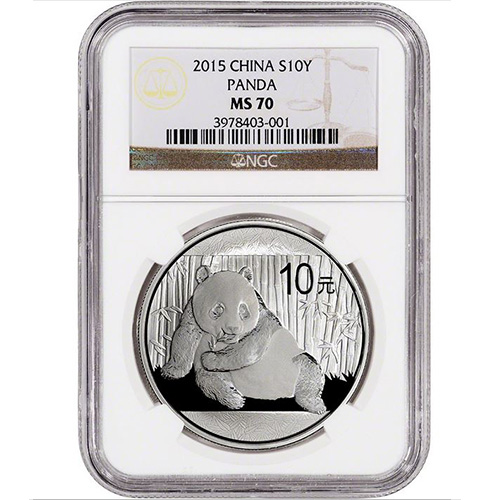 One of the most beautiful silver coins for sale today is the Silver Panda from the Chinese Mint. Introduced in 1983 as a proof coin program, the Silver Pandas were finally made available in 1989 as a bullion coin with regular production and release on an annual basis. Right now, the 2015 1 oz Silver Chinese Panda Coin is available to purchase online at Silver.com in perfect condition.

Each of the 2015 1 oz Silver Chinese Panda coins offered here at Silver.com is in perfect condition according to the NGC. Coins graded Mint State 70 exhibit full, original mint luster and feature no detracting flaws on the design elements or surface areas of the coin.

The NGC and PCGS are the world’s preeminent grading houses. Both bullion and proof coins can be graded for condition based upon both the sharpness of the design elements and the presence of detracting flaws anywhere on the coins. All coins are graded on a numeric scale ranging from 1 to 70, with 70 representing a perfect score.

On the obverse of all Silver Chinese Panda coins you’ll find the image of a giant panda. The panda species is a bear species found only the central highlands of the Republic of China. The design on the obverse changes each year, with only 2001 and 2002 featuring the same design at any point in the program’s history.

The reverse features the design of the Hall of Prayer for Abundant Harvests. This imagery is found on the reverse of the 2015 1 oz Silver Chinese Panda coin and all other Silver Pandas released in the program’s more than three decades in production. The Hall of Prayer for Abundant Harvests is located in south-central Beijing, and is located within the greater Temple of Heaven complex.

All Chinese Panda coins are struck by the Chinese Mint. Though no mint marks are ever used on the bullion coins, the Silver Panda is believed to be a product of the Shenzhen, Shenyang, and Shanghai Mint locations.

If you have any questions, please contact Silver.com. Our customer service associates are available to you on the phone at 888-989-7223, online using our live web chat, and via our email address.