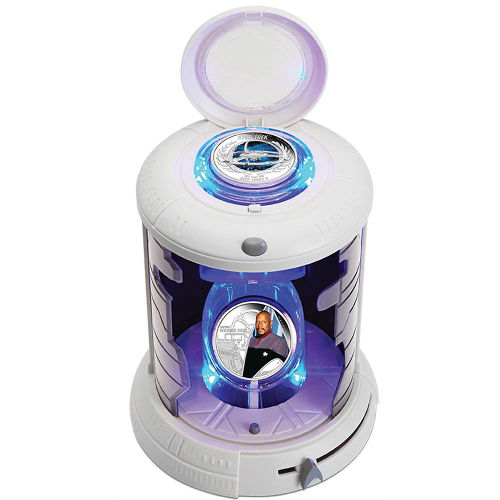 2015 marks the 60th anniversary of Gene Roddenberry’s Star Trek franchise. In 1966, William Shatner and Leonard Nimoy took television viewers “where no man had gone before” as Captain Kirk and Spock. Today, the Perth Mint celebrates the impact of the franchise on sci-fi fans around the globe with a special two-coin proof set. Right now, the 2015 Star Trek Silver Proof Two-Coin Set is available courtesy of Silver.com.

Roddenberry was deeply involved in the development of all feature films and television series in the Star Trek universe, except Deep Space Nine. Launched in 1993, the series received the blessing of Roddenberry prior to his death in 1991. The series took place in the 23rd century, and featured a captain of Federation forces at a space station near the Bajoran wormhole.

In this limited-edition two-coin set from the Perth Mint, two proof coins are included. On the reverse side of one coin is the image of actor Avery Brooks in character as Captain Benjamin Sisko, commander of the Deep Space Nine station.

The reverse side of the second coin in the set features a replica of the Deep Space Nine station itself, with a full-color background depicting a brilliant region of outer space. The reverse side of both coins features the Star Trek trademark, the weight of the coin, and its purity.

On the obverse side of both coins is the traditional portrait of Queen Elizabeth II, as designed by Ian Rank-Broadley. Each coin has the same engravings on the reverse, which include the nation of issue (Tuvalu), the year of minting, the coin’s face value, and Her Majesty’s name.

Australia’s Perth Mint is the lone survivor from the British Royal Mint system that refined gold and silver discovered in the Outback during the mid-19th century. With the Sydney and Melbourne facilities closed decades ago, the Perth Mint is the oldest operating facility in the country.

If you have questions, a Silver.com associate can help. You can reach us at 888-989-7223, connect with us online using our live chat, or send us an email. If you are looking for similar products, be sure to check out our full selection of Perth Mint products.