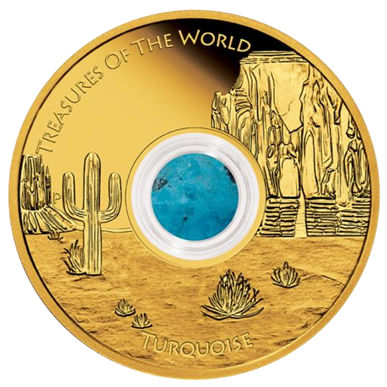 In 2013, the Perth Mint of Australia released a brand-new coin series honoring cherished gemstones from around the globe. Each coin honors a different gemstone and a region in which it is commonly found. The 2015 1 oz Gold Treasures of the World Locket celebrates the turquoise deposits found across the American Southwest. This all-new coin is available for a limited time on Silver.com.

Treasures of the World started in 2013 with the Europe coin, which commemorated loose garnet that is commonly found on the continent. The series came closer to home in 2014 with an Australia coin that featured a gold locket design. In total, the series will celebrated five different gemstones from around the world.

On the reverse side of the 2015 1 oz Gold Treasures of the World North America coin is a turquoise locket in the center of the design, with a background that features a common desert landscape. Included in the image are a cactus, tumbleweed in the foreground, and a rock cliff in the background.

The obverse side of the coin features Ian Rank-Broadley’s right-profile portrait of Queen Elizabeth II, but with less prominence. The center of the design features the transparent locket with turquoise, and the Queen’s image is moved above that to fall between the engravings of “Elizabeth II” and “Australia.”

The Perth Mint was founded in 1899 as the final of three mint facilities in the Royal Mint of London system. Although Australian federation as a group of commonwealth states occurred in 1902, it wasn’t until 1970 that the Royal Mint ceded control of the Perth Mint to the state government of Western Australia.

Please direct any questions you have a Silver.com associate. You can reach us on the phone at 888-989-7223, connect with us through our live web chat, or send us an email with your questions. To see similar products, be sure to visit our Australian Gold Kangaroo Coins page.