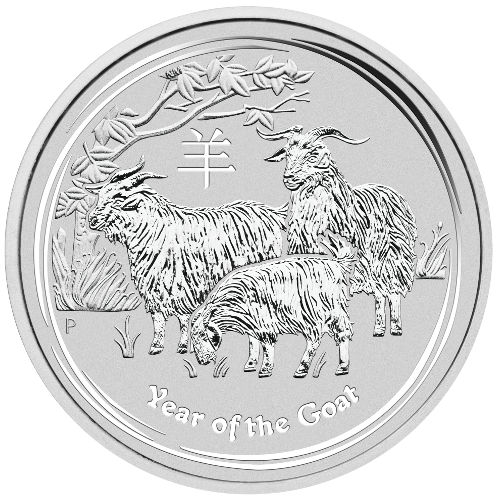 The 2015 10 oz Silver Australian Goat Coin has just been released by the Perth Mint for the new year’s Lunar Series II. As the series’ second largest coin, the 10 oz Silver Australian Goat Coin has been struck in 10 troy ounces of 99.9% pure silver and bears a face value of $10 in Australia. These coins are being offered in their mint sealed coin capsules and ship in brilliant uncirculated condition.

According to the Chinese Zodiac, the 2015 lunar year, along with 1919, 1931, 1943, 1955, 1967, 1979, 1991 and 2003 represents the Year of the Goat. Those born in a goat year are believed to posses traits of kindness, politeness and cleverness but are also said to be shy, pessimistic and indecisive. Unlike the traditional calendar year which starts on January 1st, the Chinese Zodiac often begins in late January or February.

The brand new 2015 10 oz Silver Australian Goat Coin highlights a family of three goats as they graze in an open field. Natasha Muhl, who created the design, depicts two adult goats and one younger goat. The two adult goats are pictured with their heads up, staring off into the distance. The young goat has his head down and appears to be feeding on the grass. The Chinese symbol for goat is etched above the goats with the words “Year of the Goat” etched below.

The coin’s obverse boasts the artwork of Ian Rank-Broadley who has portrayed a young Queen Elizabeth II. In his etching, the queen is turned in profile as she is wearing one of her infamous tiaras. Circling around the outer top edges of the coin are inscriptions for the queen’s name and the country of Australia. Below are the coin’s weight, metal fineness, year and face value.

As the country’s oldest mint still in operation, the Australian Perth Mint is known for their stunning precious metal bullion coins. The 2015 10 oz Silver Australian Goat Coin from the mint’s popular Lunar Series is a quality choice for most any collection of lunar coins, Perth Mint coins or wildlife themed coins. Should you require any assistance, feel free to call us at 1-888-989-7223 and we would be glad to answer any of your questions.