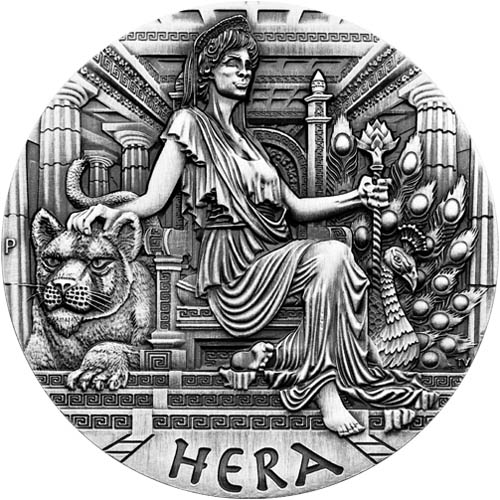 The first release of the Goddesses of Olympus Series from the Perth Mint depicts the Queen of Heaven, Hera. The sister and wife of Zeus, Hera was considered one of the most beautiful women in the world, but many spoke of her short temper and anger as detracting qualities that made her less beautiful than other goddesses, such as Aphrodite. Today, 2015 2 oz Antique Silver Tuvalu Goddesses of Olympus Hera Coins are available to you online at Silver.com.

Hera was the most powerful goddess on Mount Olympus and reigned as the ruler of Mount Olympus and the heavens. She was responsible for watching over marriage, women, birth, and the heavens in Greek mythology. In addition to those aspects of life she was associated with, she was known to be a vengeful and jealous goddess. When Paris chose Aphrodite over Hera in terms of beauty she turned her wrath on him.

All of these 2015 2 oz Antique Silver Tuvalu Goddesses of Olympus Hera Coins are available to you with an antique polish that creates the appeal of an ancient coin. The high-relief design is struck on a rimless blank to further the appearance of an ancient coin. High-relief strikes require multiple, high-pressure strikes of the blank during the coining process. The finished product in this series is packaged individually inside of a circular wooden case that features a Certificate of Authenticity from the Perth Mint.

Queen Elizabeth II is featured on the obverse of all 2015 Antique Silver Tuvalu Goddesses of Olympus Hera Coins. Her Majesty is shown here in right-profile relief in a design created in 1998 by Ian Rank-Broadley. The portrait has long featured on British and Commonwealth currency, and it depicts the Queen wearing the Girls of Great Britain and Ireland Tiara.

Hera is shown sitting on a throne in the Temple of Hera on the reverse of 2015 2 oz Antique Silver Tuvalu Goddesses of Olympus Hera Coins. She sits looking out over the temple with a staff in her left hand and is flanked on either side of her throne by a lion and peacock, the latter of which is an animal she revered as sacred.

Please contact Silver.com with any questions when buying silver. You can call us on the phone at 888-989-7223, chat with us live online, or send us an email with your inquiries.