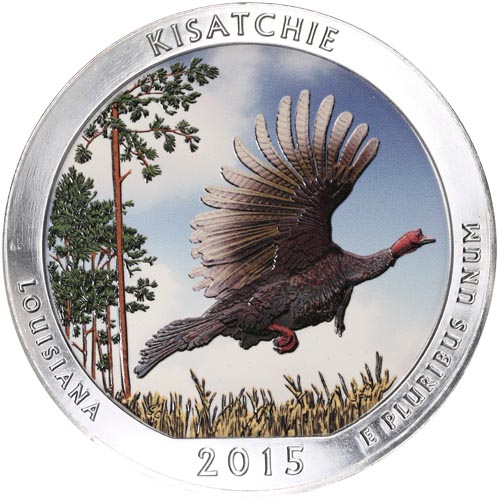 America the Beautiful Silver coins from the United States Mint live up to the “beautiful” in their name. Inspiring designs and brilliant finishes are the highlight of these commemorative coins, but now they have an all-new look in these colorized versions of the already popular coins. Right now, Silver.com offers the 2015 5 oz ATB Colorized Kisatchie Silver Coin for purchase.

America the Beautiful is a 56-coin series from the US Mint that celebrates the national forests, national parks, and historic monuments from states, territories, and districts of the US. Each year the US Mint releases five new designs, and the Kisatchie Silver Coin was the second coin released in the 2015 production cycle.

Kisatchie National Forest covers an estimated 604,000 acres of land across seven different parishes in northern and central Louisiana. The park is home to rock formations that date back to the Cenozoic period, and is also home to large sections of forest with longleaf pines. These coins have been colorized on the reverse to create a more natural appearance to the environment of the Kisatchie National Forest as depicted on the coin.

The reverse of the 2015 5 oz ATB Colorized Kisatchie Silver Coin bears the image of a waterfowl as it rests in the shallow waters of a bayou in Kisatchie National Forest. Engravings include the state of issue, name of the park, year of minting, and the phrase “E Pluribus Unum.”

On the obverse side is the left-profile portrait of President George Washington. Featured on US quarters since 1932, the image was refined in 1932 by John Flanagan, and adapted from a 1786 bust of the president completed by William Cousins.

If you have questions, Silver.com associates are standing by to help. You can reach our associates on the phone at 888-989-7223, connect with us online using our live web chat, or submit your questions via email. If you are looking for similar products, be sure to check out our selection of Silver Dollars.