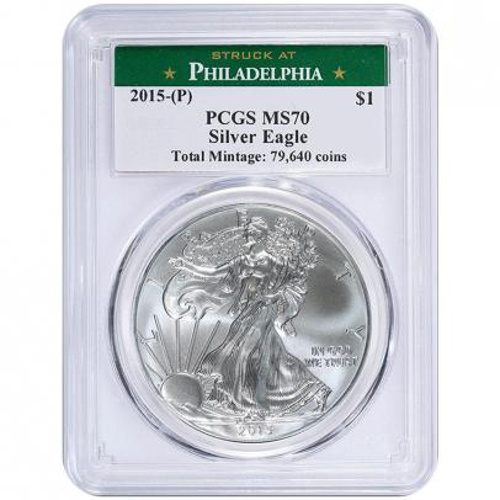 The Silver American Eagle is the world’s leading bullion coin program. Sales of this stunning silver coin have hit 44, 47, and 37 million individually in the years 2014-2016 (respectively). With such intense demand for the coins, the US Mint has pressed additional minting facilities into service to keep up with demand. The 2015 (P) 1 oz Silver American Eagle Coin is now available to you online at Silver.com.

With demand for Silver Eagles hitting all-time highs never before seen by the United States Mint, the system has been forced to adapt and press other coining facilities into service to help the West Point Mint in the striking of silver bullion coins in the collection.

The 2015 (P) 1 oz Silver American Eagle coins in this listing do not feature a “P” mint mark, which is common of the silver bullion version of the coin. However the PCGS verifies these coins originated from the Philadelphia Mint based upon packaging serial numbers on US Mint boxes.

Each of the 2015 Silver American Eagle coins in this product listing is available to you in perfect condition according to the PCGS. Coins with an MS70 grade exhibit full, original mint luster and lack all detracting flaws on the surface areas of the coin.

We encourage all Silver.com customers to contact us on the phone at 888-989-7223 with questions. You can also reach out to us online using our live chat and email features.