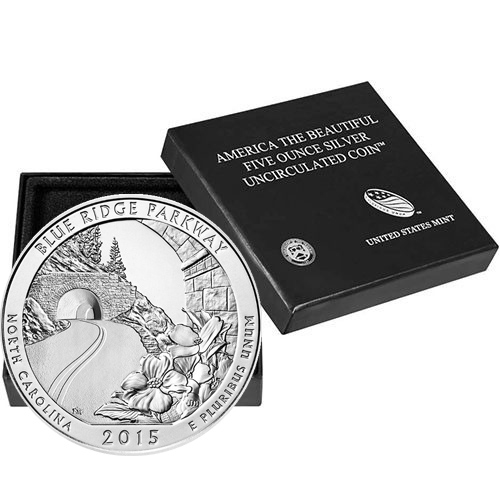 Running along the spine of the Blue Ridge Mountain range in North Carolina, the Blue Ridge Parkway is America’s longest linear national park at 469 miles in length. The roadway is one of the most scenic along the East Coast and within the entire country, and it connects two other major national parks in the country: Shenandoah National Park and Great Smoky Mountain National Park and Preserve. The 2015-P 5 oz Burnished Silver ATB Blue Ridge Parkway Coin is currently available to you online for purchase at Silver.com.

The Blue Ridge Parkway is far and away the most visited national park in the US National Park System. Just three times since 1946 (1949, 2013, and 2016) has another park attracted more visitors than Blue Ridge Parkway. The road is owned and maintained by the National Park Service and is surrounded on many sides along its 469-mile path by United States Forest Service Property.

Due to the vast stretches of protected land along the route, the Blue Ridge Parkway is an excellent place to view a variety of ecological environments. Flowering shrubs and wildflowers are the most common sites along the parkway in the spring, with old forests of oak, hickory, and tulip trees visible along the route as well.

On the reverse of 2015-P 5 oz Burnished Silver ATB Blue Ridge Parkway Coins, you’ll find the image of the roadway itself as it approaches one of the many mountain pass tunnels. Construction on the roadway began in 1935 in North Carolina and in 1936 in Virginia. An estimated 12.8 million visitors drove along the roadway as recently as 2013.

The obverse of 2015 Burnished Silver ATB Blue Ridge Parkway coins is the effigy of President George Washington. The first president features on the circulation quarter in a design from John Flanagan which has been refined and modernized for use on the ATB silver coins.

These 2015-P 5 oz Burnished Silver ATB Blue Ridge Parkway coins are available to you inside of the original US Mint boxes and include a Certificate of Authenticity. Burnished Silver ATB Coins have mint marks, unlike their bullion counterparts, and are struck by the Philadelphia Mint with a “P.”

We encourage Silver.com customers to contact us with questions at 888-989-7223. You can also reach out to us online using our live chat and email address features.