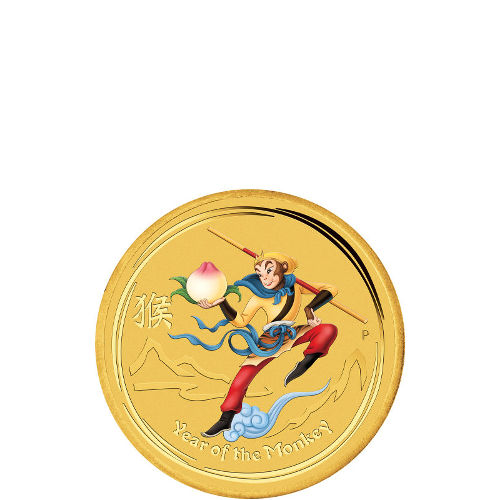 The Perth Mint is the home of lunar-themed coins in the precious metals marketplace, creating the first offering in this arena. The mint that introduced the lunar-themed concept brings a new wrinkle into its series with a unique design for the 2016 Year of the Monkey coin. The 2016 1/10 oz Gold Australian Lunar Monkey King Coin is available in BU on Silver.com.

Sun Wu Kong, otherwise known as the Monkey King, comes from a tale told in the Chinese novel Journey to the West. The story follows the travels of a Buddhist monk on his way to India to collect a variety of scriptures.

On the reverse of the 2016 1/10 oz Gold Australian Lunar Monkey King Coin is the image of Queen Elizabeth II, captured in right-profile relief by Ian Rank-Broadley in 1998. This image is the fourth-generation depiction of Her Majesty used on commonwealth coins since 1952.

The obverse of the Gold Australian Lunar Monkey King Coin includes a colorized image of the mischievous Monkey King. He is depicted with stylized mountains in the foreground and the background of the coin’s design.

Each of the 2016 1/10 oz Gold Australian Lunar Monkey King coins in this product listing has a Brilliant Uncirculated grade. Coins in this condition have no signs of wear and tear, though you may notice minor flaws such as breaks in the luster, spotted surfaces, or contact marks from the striking process.

Perth Mint is one of the world’s finest minting facilities, and it is located in the capital city of the state of Western Australia. Opened in 1899 as part of the Royal Mint system of the British, it is today the oldest operating mint in the country and a state-owned entity of Western Australia.

If you have any questions, please don’t hesitate to contact Silver.com. Our associates are available at 888-989-7223, online using our live chat, and via email.