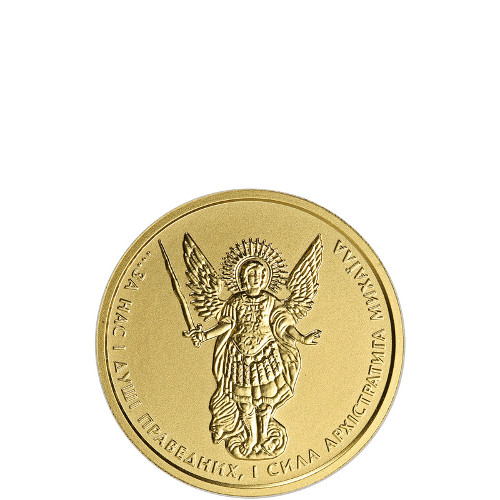 While there are a number of European coin series that are well-known in the precious metals market, the Ukrainian Archangel Michael Coins have flown under the radar for the past few years. The National Bank of Ukraine seeks to honor Saint Michael with its coins series, which is available in both gold and silver. Today, you can purchase the 2016 1/10 oz Gold Ukrainian Archangel Michael Coin from Silver.com.

The Archangel Michael is known by many names, such as the defender of Heaven, Saint Michael and Michael. Not only is known for his many names, but he also is the leader of the army of God and he is a healer. In Ukraine, he is said to protect the capital city of Kiev and the estate of Ukraine.

On the obverse of each coin, you will see the National Bank of Ukraine’s depiction of Archangel Michael. He stands with outstretched wings in full Roman armor ready to lead forces in the protection of Heaven. In his right hand, he holds a sword as he stands atop the dragon he is getting ready to slay.

The reverse of each 2016 1/10 oz Gold Ukrainian Archangel Michael features the Ukrainian Coat of Arms. Also on this side of the coin, you will see a number of engravings in Ukrainian.

All of the coins in this product listing are in Brilliant Uncirculated condition. Coins that are in BU condition won’t have any signs of wear and tear, but they may still have minor flaws. Some of these flaws include breaks in the luster, spotted surfaces and contact marks that are the result of the production process.

The National Bank of Ukraine was established in 1992 after the dissolution of the Soviet Union. The bank’s headquarters is actually the same building that a central bank for the Soviet Union used dating all the way back to 1934.

If you have questions, Silver.com associates are happy to help answer them. You can reach us on the phone at 888-989-7223, online using our live web chat, and by submitting your questions via email.