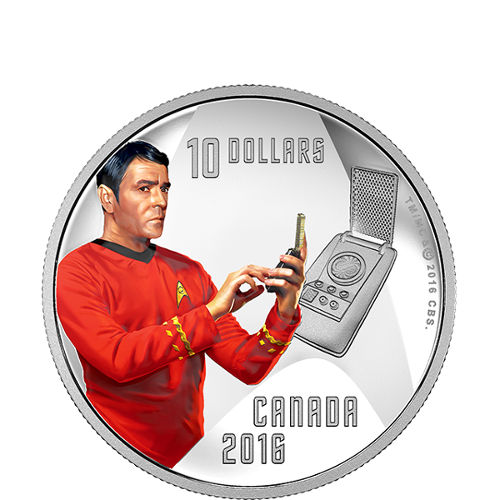 Star Trek changed the world in more ways than one. While the Original Series didn’t do well on TV, lasting for just three years, it spawned a vast array of follow-up series on television and 13 feature films in total. Although its cult status helped through the 1970s, 1980s, and 1990s, the reboot of its feature films powered it into the 21st century and the hearts of a new generation of Trekkies. Today, the 2016 1/2 oz $10 Silver Canadian Scotty Star Trek Coin is available on Silver.com.

The $10 Silver Canadian Star Trek Series features a total of four coins honoring the primary characters from The Original Series. Included in the series are coins with colorized designs featuring the images of Captain James T. Kirk, Spock, Uhura, and Scotty.

In The Original Series, Scotty was officially known as Chief Engineer Montgomery Scott. He served as the technology officer on the USS Enterprise, and the personal communication devices he provided landing parties famously delivered the line “Beam me up Scotty.” Scotty was portrayed in the show and feature films by Jim Doohan, a Canadian actor.

The reverse side of the 2016 1/2 oz $10 Silver Canadian Star Trek Scotty Coin features a colorized image of Scotty, as well as the image of his communicator. The communicator that Scotty provided crew members is considered by many as the inspiration for modern cell phones. Engravings on this face include the face value, nation of issue, and year of issue.

On the obverse of the Star Trek Scotty Silver Coin features the right-profile portrait of Queen Elizabeth II created by Susanna Blunt. Engravings include only Her Majesty’s name and the phrase “D.G. Regina.” All of the coins arrive with a Certificate of Authenticity and ship in Star Trek-themed shippers.

All $10 Silver Canadian Star Trek Silver Coins are produced by the Royal Canadian Mint. The RCM was founded in 1908 in Ottawa, and expanded in 1980 to include a secondary facility in Winnipeg.

Please feel free to reach out to Silver.com if you have any questions. You can contact us on the phone at 888-989-7223, connect with us online using our live web chat, and via our email address.