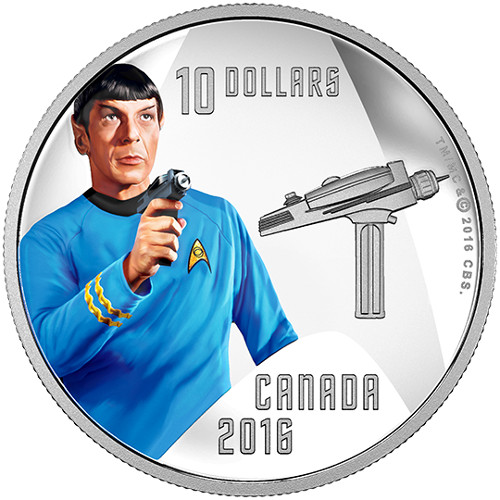 When Leonard Nimoy first made an appearance in American cinema, the world could hardly have guessed where his career was going to go. First appearing in 1952’s Zombies of the Stratosphere, Nimoy played a Martian invader in an ironic foreshadowing of the biggest role of his career. His image lives on today as the beloved Spock from Star Trek. Today, the 2016 ½ oz $10 Silver Canadian Star Trek Spock Coin is available to purchase on Silver.com in Proof condition.

Nimoy’s career in acting began in Hollywood as a teacher of acting classes. Following his appearance as a Martian, he would go on to become famous as Spock, the half-human, half-vulcan character in Star Trek. His last appearance in that role came in 2013, just two years before his death.

Each of the 2016 ½ oz $10 Silver Canadian Star Trek Spock Coins in this product listing is a Proof specimen.

The reverse of each $10 Silver Canadian Star Trek Spock Coin features the image of Nimoy in character as Spock. He is depicted wearing his trademarked blue uniform, and there are engravings of “10 Dollars,” “Canada,” and “2016.” The images used on the reverse of all Star Trek coins are copyright of CBS, which granted permission for their use in Star Trek-themed precious metal coins.

On the obverse of each 2016 ½ oz $10 Silver Canadian Star Trek Spock Coin is the image of Queen Elizabeth II. Created by Susanna Blunt for the Royal Canadian Mint, Her Majesty’s portrait is surrounded by engravings of “Elizabeth II” and “D.G. Regina.”