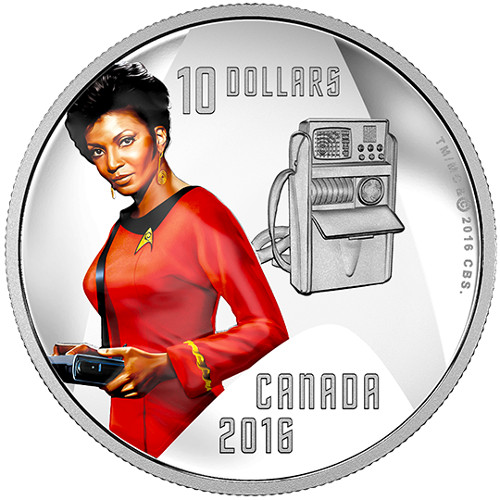 Portrayed through Star Trek: The Original Series and the sixth Star Trek feature film by Nichelle Nichols, Lieutenant Nyota Uhura was a groundbreaking character in American television in the 1960s. Prior to her role as chief communications officer on the Enterprise under Captain Kirk, no other African character had held a non-menial role in American television. Right now, the 2016 ½ oz $10 Silver Canadian Star Trek Uhura coin is available on Silver.com with a Proof grade.

Gene Roddenberry wanted cultural diversity represented in his original Star Trek series. George Takei, a Japanese-American, was a part of the show as the character Sulu. Uhura, portrayed by Nichols, joined the cast later on as Uhura.

The naming of her character was originally set to be Sulu, but fellow writers pointed out how it was close to Zulu in pronunciation and could be seen as too stereotypical for an African-American actress. The name Sulu was instead left to Takei’s character, with Uhura coming from the Swahili word uhuru, which means “freedom.”

Each 2016 ½ oz $10 Silver Canadian Star Trek Uhura Coin in this listing is of proof grade.

On the obverse of all $10 Silver Canadian Star Trek coins you’ll find the right-profile portrait of Queen Elizabeth II. Created by Susanna Blunt, a Canadian artist, Her Majesty’s image is included along with engravings of “Elizabeth II” and “D.G. Regina.”

The reverse of the 2016 ½ oz $10 Silver Canadian Star Trek Uhura coin features Nichols in her role as Uhura. The chief communications officer is depicted in her red uniform, with engravings of “10 Dollars,” “Canada,” and “2016.” This image is copyrighted by CBS, which disseminated the images for this series.

Founded in 1908, the Royal Canadian Mint is the sovereign mint of Canada. The need for the mint arose out of Canada’s emerging move toward independence in the early 20th century, and the discovery of gold in the Yukon Territories in the late 19th century. Following decades of one-mint operation in Ottawa, the mint added a facility in Winnipeg in 1980.

Please contact Silver.com with any questions at 888-989-7223. You can also chat with us online or submit your questions via email.