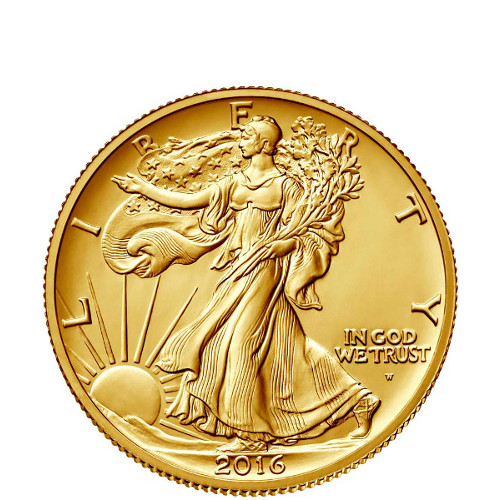 Weinman created the image of Liberty walking toward the setting sun as a representation of the nation’s constant march toward a brighter future. The image depicts Liberty wearing the American flag around her shoulders, and carrying laurels and oak branches as a symbol of the country’s civic and military achievements.

The 2016 1/2 oz Gold American Walking Liberty Half-Dollar Coin recreates Weinman’s original image to commemorate the 100th anniversary of its release in 1916. Weinman won a contest hosted by the Treasury Department featuring three artists, and he did so twice. Seeking new designs for the dime, quarter, and half dollar, Weinman’s designs for the dime and half dollar were chosen.

On the obverse of the coin is the Walking Liberty design. Weinman’s original design was nearly bumped from circulation because it was extremely difficult to strike accurately on the half dollar, with a new design from US Mint Chief Engraver Charles E. Barber nearly used to replace it. The Walking Liberty design continued on the half-dollar coin, and remained in circulation through 1947.

The reverse features Weinman’s original American bald eagle design, with the bird on its perch at the edge of a cliff. Engravings on this face of the coin include “United States of America,” “E Pluribus Unum,” and the coin’s face value. An additional engraving is included that identifies the coin’s metal content, purity, and weight.

If you have any questions about the 2016 Gold American Centennial Coins or the 2016 1/2 oz Gold American Walking Liberty Half-Dollar coin, please don’t hesitate to ask. Silver.com associates are available at 888-989-7223, using our live web chat, and via our email address.