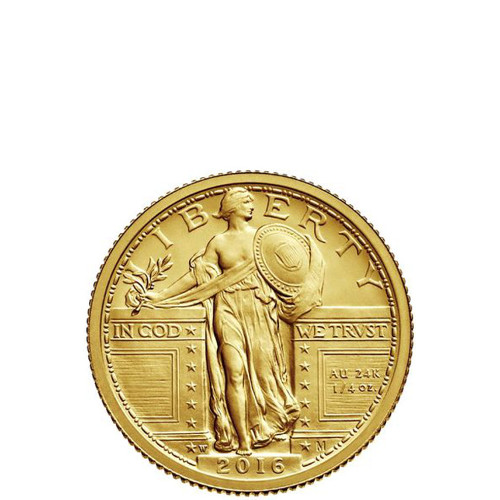 An exciting new range of commemorative gold coins from the United States Mint has rolled out, generating immense interest from collectors and investors alike. Celebrating the centennial of some of the nation’s greatest designs, the 2016 Gold American Centennial Coins bring America’s best historic designs to life on a 24-karat gold coin. Right now, the 2016 1/4 oz Gold American Standing Liberty Quarter coin is available on Silver.com.

In the early 20th century, the United States Mint and Treasury Department were in the midst of a complete overhaul of the nation’s currency. A program that started in 1905 under President Theodore Roosevelt was in full stride by 1916, with three of the nation’s most common coins redesigned.

Adolph A. Weinman and Hermon Atkins MacNeil won contests for their designs to appear on the face of the dime, quarter, and half-dollar coins. Weinman’s designs appear on the dime and half dollar, while MacNeil’s Standing Liberty replaced the Barber quarter from US Mint Chief Engraver Charles E. Barber. Still the Chief Engraver in 1916, Barber’s quarter design was unveiled early in his term in 1892.

On the obverse face of the 2016 1/4 oz Gold American Standing Liberty Quarter Coin is the image of Liberty in full-length figure, standing guard in the gap of a wall. MacNeil’s original creation depicted Liberty bare-chested, but the design that appeared on most coins was altered by the US Mint to give Liberty a chain-mail chest plate.

The reverse of the coin includes the image of an American bald eagle in flight, with engravings of “United States of America,” “E Pluribus Unum,” and the coin’s face value. Additional engravings for this series include the coin’s metal content, purity, and weight. The “W” mint mark of the West Point Mint is included as well.

Each of the 2016 Gold American Centennial Coins includes 24-karat pure gold, has a limited mintage, and will ship in a hardwood box that has a classic, black-matte finish from the United States Mint.

If you have any questions, please don’t hesitate to ask Silver.com. Our associates are available at 888-989-7223, online using our live web chat, and via our email address.