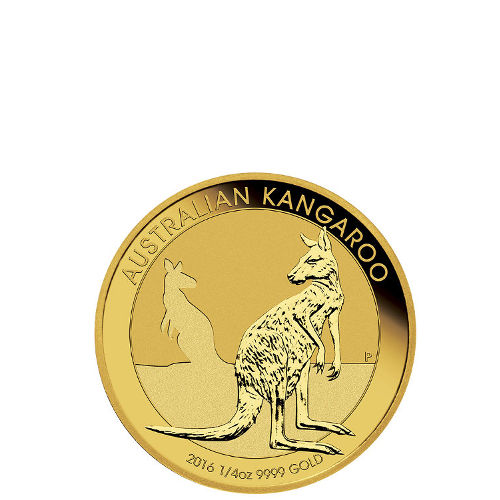 There is no animal as synonymous with the nation of Australia as the kangaroo. The world’s largest marsupial, these majestic and powerful creatures were not seen by outsiders to the continent until the end of the 18th century. Since then, they have become an enduring symbol of the nation. Right now, Silver.com offers the all-new 2016 ¼ oz Gold Australian Kangaroo Coins.

Gold Australian Kangaroos are among the newest sovereign bullion coins produced by the Perth Mint. These coins follow in the footsteps of the popular Australian Koala and Australian Kookaburra programs from the Perth Mint, and are made available in 1 kilogram, 1 oz, ½ oz, ¼ oz, and 1/10 oz weights.

The kangaroo is a beloved creature in Australia. The four subspecies of kangaroo are found mostly in the western portions of the nation where there is less industrialization and suburban sprawl from mankind to impact growth. Today, the kangaroo is found on symbols around the nation, from its official coat of arms to the brand logo for Quantas Airlines, a national and international carrier based in Australia.

On the obverse is the image of Queen Elizabeth II. The current right-profile portrait of Her Majesty is the fourth-generation depiction of the monarch, whose reign has stretched over 63 years now. This image was originally designed in 1988 by Ian Rank-Broadley, whose “IRB” initials appear in an engraving below her bust.

The reverse features the new 2016 ¼ oz Gold Australian Kangaroo design. In the foreground, a lone kangaroo is featured resting on its haunches as it stares back over its right shoulder. In the distance you can see the silhouette of another kangaroo, finished in a beautiful frosted appearance.

The Perth Mint was founded in 1898, just a few years before Australia would file its federation articles and separate from the United Kingdom. However, control of the Perth Mint remained in British hands until it was ceded in the 1970s.

If you have any questions, please contact Silver.com. Our associates are available at 888-989-7223, online using our live web chat, or via email. If you are interested in similar products, be sure to check out our full selection of Gold Perth Kangaroos.