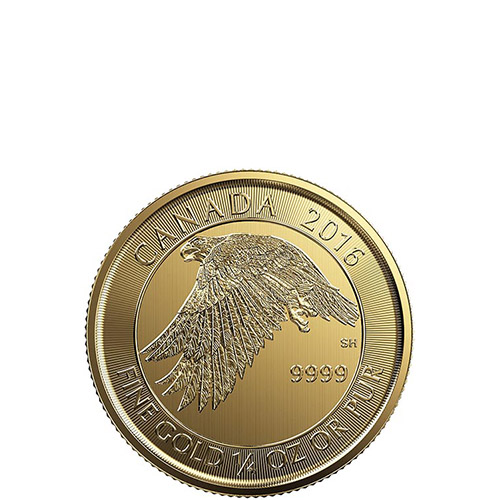 Those who buy gold from the Royal Canadian Mint are often fans of wildlife-themed coin designs. The Royal Canadian Mint has produced beautiful wildlife coin designs that include the Canadian Wildlife Series and the Birds of Prey Series. The White Falcon did not feature in either, but was instead issued on its own in a beautiful 1/4 oz gold coin. Right now, 2016 1/4 oz Gold Canadian White Falcon Coins are yours to purchase online at Silver.com.

2016 1/4 oz Gold Canadian White Falcon Coins are available to purchase online at Silver.com in Brilliant Uncirculated condition. All coins are housed inside of protective packaging or inside of sealed packages from the Royal Canadian Mint.

The White Falcon is officially known as the Gyrfalcon and is native to the northern stretches of North America, Europe, and Asia. White Falcons have vastly different colors in their plumage based on the region in which they live. While some have all-white coloration in their plumage, it is possible to have mixtures of white and brown feather colors and even all-brown coloration in the plumage.

On the reverse side of 2016 1/4 oz Gold Canadian White Falcon Coins is the image of a White Falcon in flight. The birds typically live along the coastal stretches of the Arctic Circle and breed within their home range. In fact, the White Falcon is known to leave the Arctic in the winter months as that is not their breeding period during the year.

The obverse of 2016 1/4 oz Gold White Falcon Coins from the Royal Canadian Mint includes the fourth-generation portrait of Queen Elizabeth II on Canadian coinage. This right-profile portrait was created in 2003 by Susanna Blunt, just the second Canadian artist to design a monarch’s portrait for national coinage.

This right-profile portrait now features on all Canadian coinage, both bullion and circulation. Blunt’s design of Queen Elizabeth II is unique in that it is the first monarch’s portrait on a Canadian coin since the reign of Elizabeth’s father, King George VI, to depict the leader without a crown.

The Royal Canadian Mint was founded in 1908 with an Ottawa Mint facility. This location was the lone facility to strike Canadian bullion until the Winnipeg Mint was opened in the late 1970s. The Winnipeg Mint strikes and prints circulation currency, while the Ottawa Mint handles the production of bullion coinage.