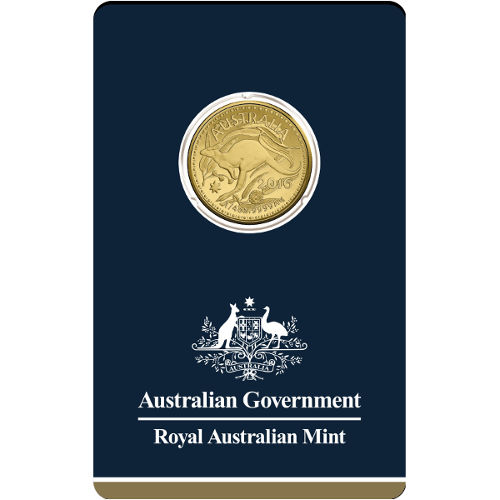 Any quantity available for $27.99 per coin over spot!

The Royal Australian Mint is often overshadowed by the history and variety of products from the state-controlled Perth Mint, but it also produces some of the finest commemorative bullion and proof coins in the world. The newest expansion of its line includes the 2016 ¼ oz Gold Royal Australian Kangaroo Coin, available for purchase today on Silver.com.

Kangaroo designs first appeared on Australian coinage in the mid-20th century. The Perth and Melbourne Mints, formerly responsible for production of circulation currency under British rule, introduced a copper penny in 1911 for the Commonwealth of Australia.

It wasn’t until the reign of King George VI that the kangaroo appeared on the reverse of the penny. That design remained a stalwart of the nation’s penny through 1964, when it was finally discontinued ahead of the decimalization of Australian currency in 1966.

On the reverse face of these 2016 ¼ oz Gold Royal Australian Kangaroo coins you’ll find that original leaping kangaroo design, complete with the star of the commonwealth. Added features to this design include the encircling leaves of the Tasmanian Blue Gum and the engravings of the coin’s nation of issue, year of issue, weight, purity, and metal content.

The obverse features the right-profile portrait of Queen Elizabeth II. Her Majesty’s effigy has appeared on Australian currency since she ascended to the throne in 1952, and this image comes from Ian Rank-Broadley in 1998.

If you have any questions about these exciting new gold coins, please reach out to a Silver.com associate. We’re available on the phone at 888-989-7223, online using our live web chat service, and by submitting your questions in writing to our email address.