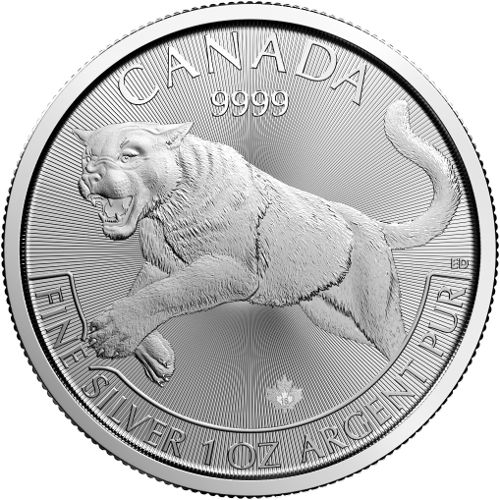 There are few creatures in the Western Hemisphere that strike more fear in the hearts of mankind than the cougar. The world’s fourth largest cat is elusive, powerful, and silent in attack. You won’t realize this beast is hunting you until its too late. Today, you can capture this elusive beast without a fight by purchasing the 2016 1 oz Silver Canadian Predator Cougar Coin on Silver.com.

The cougar is perhaps the most elusive predator in the Western Hemisphere. Despite a range that sees these creatures occupy forests and mountains from the wilds of Canada as far south as Patagonia in South America, the cougar is not something people run into on a daily basis.

Cougars have appeared on Canadian currency in the past, but the designs are so popular that new incarnations frequently appear on RCM commemorative coins. The first popular cougar came from the Canadian Wildlife Series, as well as the privy mark used on Canadian Maple Leaf coins and the all-new gold coin series “Call of the Wild.”

On the reverse of the coin you’ll find the stunning image of a cougar leaping from a rockface down to attack its prey. The cougar’s paws are out and ready to grip its prey, while the mouth is open and ready to strike. Engravings include the nation of issue, year of issue, and face value of the coin.

The obverse face includes the right-profile portrait of Queen Elizabeth II created by Susanna Blunt. Introduced in 2003, Her Majesty’s effigy appears on all Canadian coins, both circulation currency and commemorative bullion products alike. These particular coins have only Her Majesty’s name and the phrase “D.G. Regina” on the obverse.

Royal Canadian Mint operates two facilities. The original facility is located in the federal capital of Ottawa, and a second facility opened in Winnipeg in 1980.

Please contact Silver.com with any questions about these exciting new coins. Our associates are available at 888-989-7223, online using our live chat, or via email.