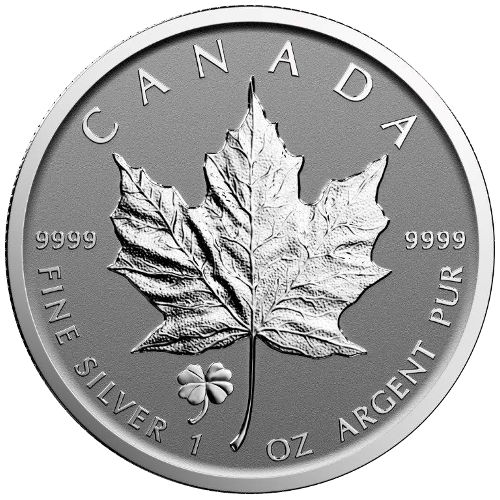 Canadian Maple Leaf coins are available from the Royal Canadian Mint on an annual basis in gold, silver, and platinum. While the gold version has the greatest variety of weights, the Silver Canadian Maple Leaf is the most popular, and features its own variations in the form of popular privy marks.

This unique release of the 2016 Silver Canadian Maple Leaf features a privy mark on the reverse side representing a clover leaf. Known as a good-luck charm in Irish lore, the clover privy on this coin is featured to the lower left of the sugar maple leaf design.

Each one of these 2016 Clover Privy Silver Canadian Maple Leaf coins is struck in reverse proof, which indicates a coin with a strong, frosted finish on the background field and a deeply-mirrored appearance on the design set.

The reverse side of the coin features the traditional sugar maple leaf design, along with engravings that identify the nation of issue, purity, and weight of the coin. The clover privy is featured on this side along with the RCM’s enhanced security features.

On the obverse you’ll find the right-profile portrait of Queen Elizabeth II. Created in 2003 by Canadian artist Susanna Blunt, this is the third image of Her Majesty to appear on Silver Canadian Maple Leaf coins since their 1988 release.

If you have any questions, please contact Silver.com at 888-989-7223. You can also reach out to us online using our live chat and email features.