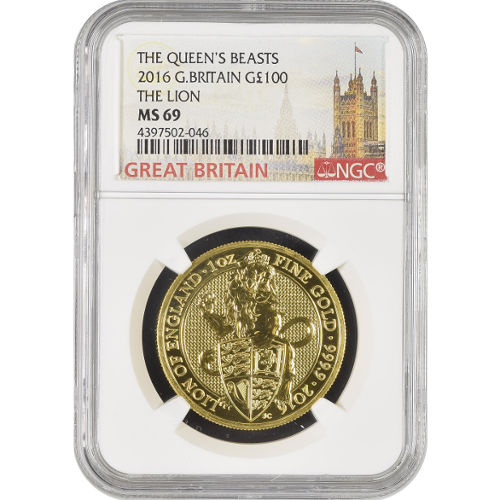 The latest coin series from the Royal Mint in England is the new Queen’s Beasts coin series. Featuring both gold and silver versions with each new release, there will be a total of 10 coin designs in this upcoming series. The first of these is the Lion of England, which is available right now on Silver.com with release of the 2016 1 oz Gold British Queen’s Beast Coin.

Jody Clark is the designer behind both images found on the 2016 1 oz Gold British Queen’s Beast Coins from the Royal Mint. At just 33 years old, Clark became the youngest artist in Royal Mint history to design a new portrait of the Queen when he developed the all-new right-profile portrait of Her Majesty that was unveiled in July 2015.

Clark is also the creator of the Lion of England design, the first of ten new exciting designs from the Royal Mint. The theme of the new series, available in gold and silver bullion, is the Queen’s Beasts. At her official coronation in 1953, there were a total of 10 six-foot tall statues surrounding Her Majesty. Designed by James Woodford RA, chief among these designs was the Lion of England.

The official symbol of the nation and appearing on the coat of arms for both Britain and the Royal Family, the Lion of England is depicted on the reverse of the 2016 1 oz Gold British Queen’s Beast Coins standing on its hind legs with one front paw holding the nation’s heraldic shield, while the other is poised to strike at any who threaten the nation.

On the obverse of the 2016 1 oz Gold British Queen’s Beast coins you’ll find that all-new portrait of Queen Elizabeth II. This depicts Her Majesty as she appears now at the age of 90. Engravings on this face include the face value of the coins, Queen Elizabeth II’s name, and the phrase “D.G. Reg FD.”

Each 2016 1 oz Gold British Queen’s Beast Coin in this product posting earned a near-perfect grade from the NGC. Coins in MS69 condition have full, original mint luster, but also bear minor detracting flaws. These flaws are limited to a maximum of two at this grading level, and include miniscule hairlines and contact marks.

If you have any questions, we encourage you to contact Silver.com customer service. Our team members are available at 888-989-7223, online using our live chat, or via our email address.