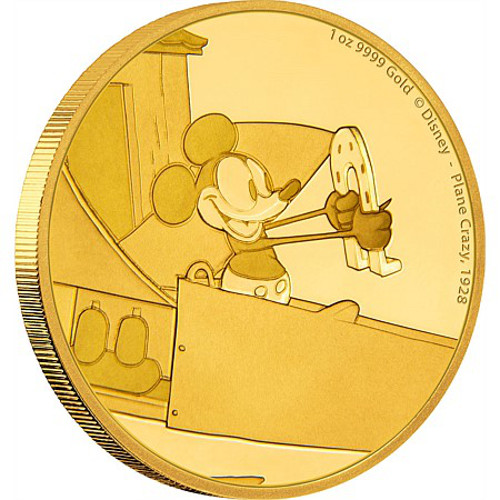 Mickey Mouse is one of the most iconic images from the Disney Studios. The Mickey Through the Ages Coin Series from the New Zealand Mint features a variety of images of Mickey Mouse from animated Disney shorts that were released in the 1920s and 1930s. Today, you can purchase the 2016 1 oz Gold Niue Mickey Mouse Plane Crazy Series Proof Coins at Silver.com.

The Disney animated short film Plane Crazy, Mickey Mouse tries to build an airplane. To build his airplane, Mickey uses parts from farm equipment and scrapped car parts. A few of his friends from the farm help out, too. This film, released in 1928, was one of the first to feature Minnie Mouse, who gives Mickey a horseshoe for good luck before he took flight.

All of the coins from this listing will ship out in a wooden display box, which not only protects your valuable product, but is also a great way to display the piece. With the box, you will also get a Certificate of Authenticity and a shipper box featuring artwork from the Plane Crazy short film.

Each 2016 1 oz Gold Niue Mickey Mouse Plane Crazy Series Proof Coin features the image of Mickey Mouse holding his horseshoe that was gifted to him by Minnie Mouse as he stands in the cockpit of the plane he built. On this side, you will find engravings of the coin’s weight, purity and metal content, as well as the name of the film and the year of its release.

The obverse of each coin bears the image of Queen Elizabeth II in a right-profile relief. This portrait was created in 1998 by Ian Rank-Broadley. It is the fourth iteration of the Queen on New Zealand coinage.

The New Zealand Mint makes all of the Mickey Through the Ages coins for the government of Niue. The mint is located in Auckland, New Zealand. While it is the country’s only active mint, it is not associated with the government. Coins for New Zealand are created by the Royal Mint and the Royal Canadian Mint.