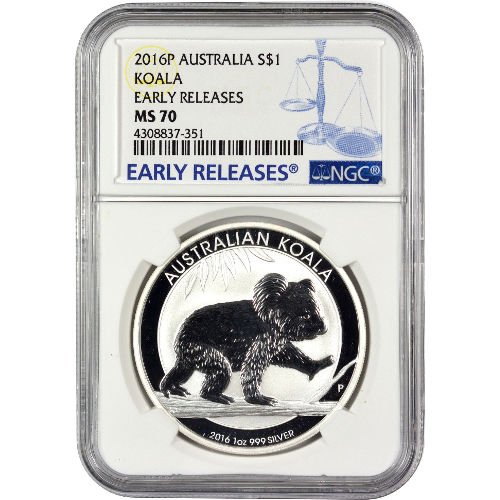 Each 2016 Silver Australian Koala coin in this product listing earned a perfect certification from the NGC. MS70 coins exhibit full, original mint luster and feature no detracting flaws of any kind.

As an Early Release coin, these products had to arrive at the NGC or an approved depository within the first 30 days of release. This is dependent upon the release date set by the Perth Mint.

On the reverse face of the coin you’ll find the image of the koala, an all-new design for 2016. While it is often referred to as the koala bear, the animal is in fact a nocturnal marsupial, not a bear.

The obverse face of the coin has Ian Rank-Broadley’s effigy of Queen Elizabeth II. Captured in right-profile relief, this portrait is the fourth-generation depiction of Her Majesty on British and Australian coinage.

Australia’s Perth Mint is the oldest operating facility in the country. A state-owned entity of Western Australia today, it was originally founded in 1898 by the British Royal Mint and was the third mint opened by the British in the country as a colonial territory. All of its coins are considered legal tender under the Currency Act of 1965.

If you have any questions, please feel free to contact Silver.com at 888-989-7223. You can also contact us online using our live chat or email features.