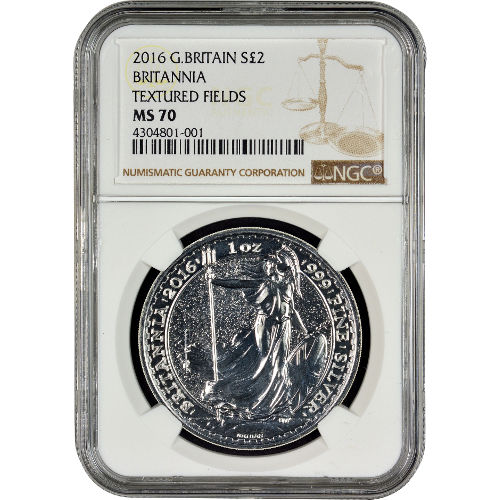 The Silver British Britannia is the most popular commemorative bullion coin from the Royal Mint. Struck on an annual basis since 1987 in gold and 1997 in silver. Britannia is a name that came from Roman and Greek culture, and was first used to describe in the island of Britain as a geographical region. Right now, Silver.com offers the 2016 1 oz Silver British Britannia coin in perfect condition with a rare textured field finish.

Queen Elizabeth II ascended to the British throne in 1952 following the death of her father. Since that time, her right-profile portrait has featured on the obverse of British coins and those of current and former commonwealth nations, such as Canada, Australia, and New Zealand.

Over the course of her 64-year reign, the Queen’s image has been updated to reflect her current age on the throne. The most recent image came from Sir Ian Rank-Broadley in 1998. As of July 2015, a new portrait is available for use on British and commonwealth coins. This image comes from Jody Clark, who at 33 years old is the youngest artist to create the portrait of Her Majesty for British coins.

These 2016 1 oz Silver British Britannia coins are each perfect specimens according to the NGC. Coins with an MS70 grade exhibit full, original mint luster and feature no detracting flaws of any kind. The unique textured field finish adds to the distinct background by creating a dimpled, or hammered, appearance.

On the reverse is the image of Britannia, which was most recently upgraded in 2015. The obverse features the aforementioned right-profile portrait of Queen Elizabeth II as created by Clark in early 2015.

If you have any questions, please feel free to ask a Silver.com associate. We’re available on the phone at 888-989-7223, online using our live chat, and via email address.