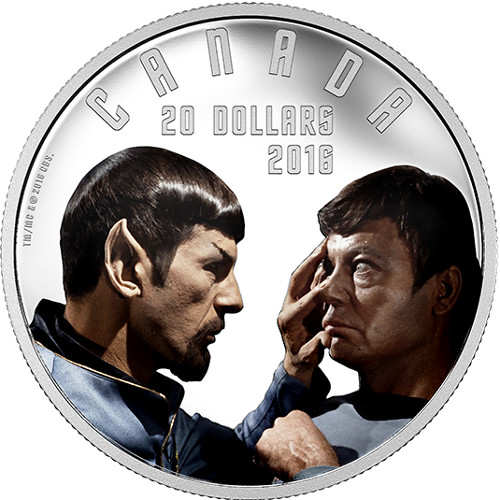 Star Trek has brought countless memories to those who followed the franchise from its humble beginnings on television to its mega blockbusters on the big screen in the 21st century. Over the course of the past 50 years, the franchise has produced countless moments that live on in the minds of Trekkies. A new series from the Royal Canadian Mint recounts those moments, and the 2016 1 oz Silver Canadian Star Trek Mirror Mirror coin is one such product, available now on Silver.com.

In the finale release of the series, scheduled for late 2016, the Royal Canadian Mint will introduce another colorized design from the episode entitled “The Trouble with Tribbles.” Each coin has brilliant colorized finishes on the reverse design, with copyrights held by CBS.

The year 2016 marks the 50th anniversary of Gene Roddenberry’s Star Trek universe appearing on CBS television in the United States. Although Star Trek: The Original Series only ran for three seasons starting in the fall of 1966, it lived on as a cult classic that spawned countless comic books, animated series, four further TV series, and more than a dozen feature films.

On the obverse of each 2016 1 oz Silver Canadian Star Trek Mirror Mirror coin is the image of Queen Elizabeth II. Her right-profile portrait was created by Susanna Blunt, and is accompanied by engravings of “Elizabeth II” and “D.G. Regina.”

The reverse of the Silver Canadian Star Trek Mirror Mirror coin features a scene from “Mirror, Mirror” in which Spock and Captain Kirk interact. A landing team led by Captain Kirk is accidentally transported to a parallel universe when they are trying to return to the ship during an Ion storm and the transporter malfunctions.

Each of these 2016 1 oz Silver Canadian Star Trek Mirror Mirror Coins is a Proof specimen.