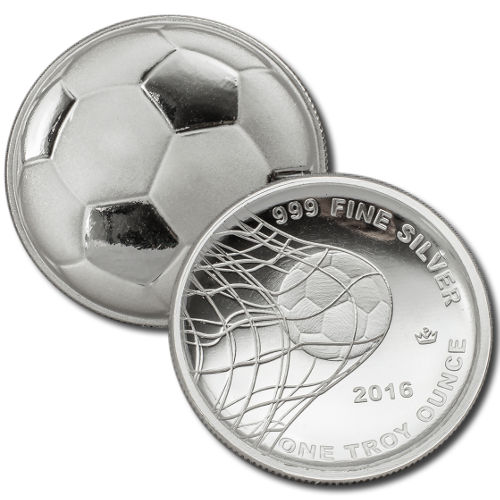 No sport on planet Earth can claim the following that soccer, or football if you prefer, has earned over the course of human history. There isn’t a settled continent or civilized human society that hasn’t participated in some form of soccer, reaching as far back as 600 BC to the modern era.

Rounds are popular precious metals products due to their low premiums over the price of silver. Today, the 2016 1 oz Silver Monarch Domed Soccer Ball Round is available as a brand-new product on Silver.com.

While the English like to claim the title as the “creators of the sport,” the official international governing body for soccer recognizes an ancient Chinese game known as Tsu Chu as the first version of the game to feature regular rules.

Even though soccer’s official roots may lie in China, it is truly the world’s game. The ancient Greeks and Romans both played ball games using feet to propel the ball around the field. The Maori people of New Zealand played a game known as Ki-o-rahi on a circular field with seven players and different zones.

The English contribution to the sport was the popular mob football. Entire villages would participate in a no-holds-barred version of the sport that saw as many people as were willing to participate try to kick a ball (or more accurately, an inflated sheep’s bladder) from one village to the next over vast spaces.

However you know the sport, it is the world’s most popular game and is referred to as “The Beautiful Game” because so many of its masters have achieved greatness with deft touches and skill unmatched by the vast majority of the world’s population. Now’s your chance to have a piece of the world’s game in a silver round with the 2016 1 oz Silver Monarch Domed Soccer Ball Round.

On the obverse of each round you’ll find design features the mimic the appearance of an actual soccer ball, with traditional patchwork finishes and a 3D domed design. The reverse of the 2016 1 oz Silver Monarch Domed Soccer Ball Round has the Monarch mint logo, and engravings of the round’s metal content, weight, and purity.

Monarch Precious Metals was founded in the Rogue Valley of Southern Oregon in 2008. All of its original products are hand-stamped and hand-poured using a minimum of .999 pure silver or gold.

Please don’t hesitate to contact Silver.com with any questions about these silver rounds. You can contact us on the phone at 888-989-7223, online using our live web chat, or by sending us an email.