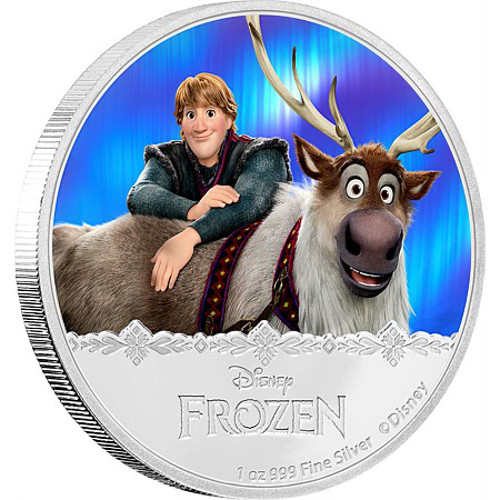 Disney products are hot sellers among children and adolescents, and when it comes to precious metal products, they’re apparently just as popular. The New Zealand Mint has a variety of Disney-themed coins, with the Frozen: Magic of the Northern Lights Series among the newest options. The 2016 1 oz Silver Niue Disney Frozen Kristoff and Sven Coin is now available online at Silver.com.

Frozen: Magic of the Northern Lights is one of the New Zealand Mint’s newest colorized silver coin programs, and features 1 oz silver coins with brilliant full-color artwork on the reverse. Each coin focuses on one of the main characters from the film, or in this case, characters.

Kristoff is a loner in the kingdom of Arendelle, with his reindeer Sven providing his only true companionship. His only companionship, that is, until he meets the playful and beautiful Princess Anna. Together with Sven, Kristoff is a hard-working and independent spirit who begrudgingly helps Anna before falling in love with her.

The obverse of all 2016 1 oz Silver Niue Disney Frozen Kristoff and Sven Coins features the image of Queen Elizabeth II. Her Majesty’s effigy is captured in right-profile relief and was created in 1998 by Ian Rank-Broadley.

On the reverse is the colorized image of Kristoff and Sven. The pair are featured with lighthearted looks on their faces, with Kristoff leaning on the back of Sven. Behind them is a brilliant colorization of the Northern Lights flashing in the skies over Arendelle.

Each of the 2016 1 oz Silver Niue Disney Frozen Kristoff and Sven Coins in this product listing is a proof coin that arrives in a beautiful, Disney storybook-themed presentation case. Your individual coins also come with a numbered Certificate of Authenticity.

New Zealand Mint is the only minting facility in the country, and is a privately-owned company. While it produces a variety of stunning commemorative and bullion-grade coins, official New Zealand currency is struck by the Royal Canadian Mint and Royal Mint of London instead.

We encourage shoppers with questions to contact Silver.com at 888-989-7223. Our customer service teams are available online as well through our live chat and email features.