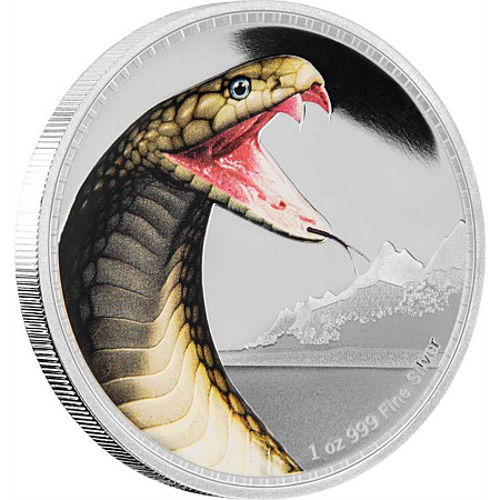 Each of the coins in the Kings of the Continents Series of silver coins from the New Zealand Mint features a colorized design to bring the imagery to life. The King Cobra depicted on these coins is captured in its natural hues, with an image of the snake with its head propped up and ready to strike.

These 2016 1 oz Silver Niue Kings of the Continents King Cobra Coins is a Brilliant Uncirculated specimen. Coins in this condition show no signs of wear and tear, but also have minor blemishes such as breaks in the luster, spotted surfaces, and contact marks from the striking process.

On the reverse of each coin you’ll find the colorized design of the King Cobra. This side of the coin includes engravings that read “1 oz 999 Fine Silver.” Included in the image is a jungle mountain that is indicative of some of the snake’s habitat.

New Zealand Mint is home to some of the most popular silver and gold coins in the world. Located in Auckland, it is a private facility and is not associated with the production of official New Zealand currency.

Please feel free to reach out to Silver.com if you have any questions regarding the Kings of the Continents Series. You can contact us on the phone at 888-989-7223, online using our live web chat, or by sending us an email.