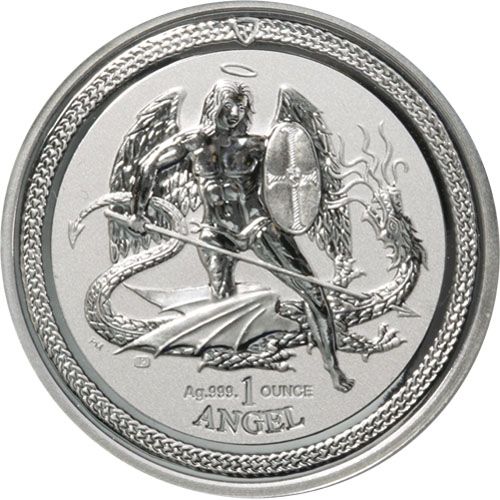 The first coin featuring the Angel design was introduced in England by Edward IV in 1465, and was based upon the French coin known as the Angelot. That original gold coin featured a depiction of Michael, the archangel, slaying the dragon and was said to bring good luck and health to those who received it.

Each of these 2016 1 oz Silver Reverse Proof Isle of Man Angel coins has a Brilliant Uncirculated grade. Coins in BU condition show no signs of wear and tear, though you may notice minor flaws that include breaks in the luster, spotted surfaces, or contact marks from the coining process.

On the obverse of the Isle of Man Angel coin is the right-profile portrait of Queen Elizabeth II. Sanctioned by Buckingham Palace and created by Ian Rank-Broadley, this is the fourth-generation image of Her Majesty and was created in 1998. It includes simple engravings of “Elizabeth II,” “Isle of Man,” and “2016.”

The reverse side of the 2016 1 oz Silver Reverse Proof Isle of Man Angel Coin is the image of Michael as he slays the fire-breathing dragon. Included in the depiction is Michael standing over the dragon, a long spear in hand and a shield in the other. Engravings are limited to the metal content, purity, and weight of the coin.

The Pobjoy Mint is a private minting facility located in the United Kingdom. Though it does not strike official British currency, it does produce a variety of circulation and commemorative coinage for countless other nations and island territories.

If you have questions, Silver.com associates are available at 888-989-7223, online using our live chat, and via our email address.