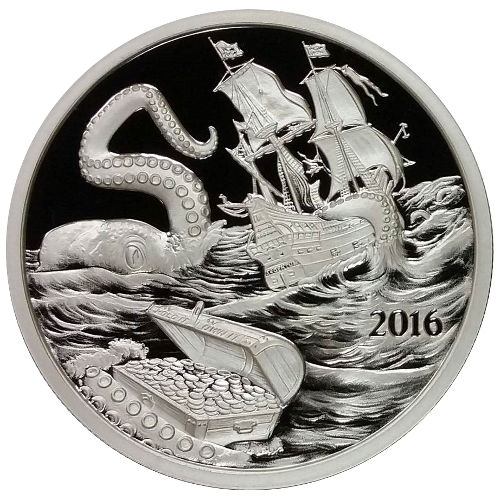 The kraken was one of the most feared beasts of ancient times, terrifying sailors the world over. Today, the kraken is immortalized in feature films and fairytales of pirates. It is also captured brilliantly on the obverse of the 2016 1 oz Silverbug Proof-like Kraken Round, which is currently available for purchase on Silver.com.

The kraken is found in countless tales from human history. Modern tales of pirate lore talk of the kraken pouncing on unsuspecting sailors in the Caribbean, dragging their riches and ships down to the depths of Davey Jones’ locker. In reality, the kraken has roots farther back than that.

Although rumored in Greek and Roman mythology, the first written records of the kraken came from the 13th century when Viking sailors traveling between Norway and Greenland told of a mythical beast haunting the waters of the North Atlantic.

Each of the 2016 1 oz Silverbug Kraken Rounds in this product listing has a proof-like finish that includes mirrored finishes on the background fields.

On the obverse of each round is the unique kraken design, found only on this second release in the Welcome to Silverbug Island series. The design features the kraken emerging from the water to envelope an entire galleon, sending its treasures and sailors to the depths of the sea below.

The reverse of the round includes the common design theme that will feature on all the rounds in the series. This image depicts a pirate’s ship run aground on an island of silver coins, and includes the engravings of “Welcome to Silverbug Island” above the design and “1 Troy Oz .999 Fine Silver” below.

Please feel free to reach out to Silver.com with any questions you might have about Silverbug Kraken rounds. You can reach us at 888-989-7223, connect with us online using our live chat, or email us.