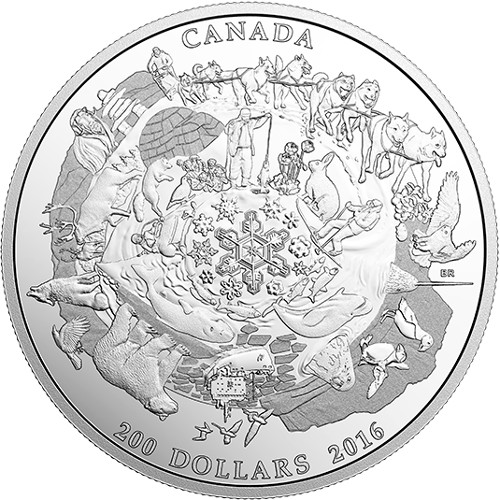 Across the vast majority of the North American continent, from the Pacific Ocean in the west to the Atlantic Ocean in the east, there is a massive polar region known as the Arctic Circle. This unforgiving plot of land is home to only the most hearty individuals, and natural wildlife. Today, the 2016 2 oz Proof Silver Canadian Canada’s Icy Arctic Coin is available to you online at Silver.com.

The Arctic Circle is the northernmost circle of latitude on Earth among the five major, recognized circles of latitude. Above the Arctic Circle, the sun rises into the sky for 24 hours continuously at least once per year, and the exact position of the region shifts slowly over time. The latitude of the Arctic Circle depends upon the axial tilt of Earth, which can fluctuate within a 2-degree margin every 40,000 years.

The reverse side of the Icy Arctic Coin includes multiple images married together in a beautiful design that encompasses all of the natural wonder of Canada’s flora, fauna, and human activities. Included in the design on the meandering landscape are icebergs, ice floes, open water featuring ice fishing, dog sledding and snowmobiling on land, and animals ranging from the polar bear and Arctic wolf to the caribou and muskox.

On the obverse of each of these coins is the image of Queen Elizabeth II. Her Majesty has appeared on the obverse of Canadian currency since her ascension to the British throne in 1952, with this particular design created in 2003 by Canadian artist Susanna Blunt.

In this unique 2016 2 oz Proof Silver Canadian Canada’s Icy Arctic Coin release you’ll find a distinctly different take on coin design on the reverse. The imagery from Bonnie Ross looks at the Arctic Circle as though one were in space directly above the circle, looking down at it from above on the Canadian continent.

Please feel free to reach out to Silver.com regarding these silver coins. Our customer service associates are available on the phone at 888-989-7223, online using our live chat, and via our email address, and you can always stay updated on the spot price of silver on our website.