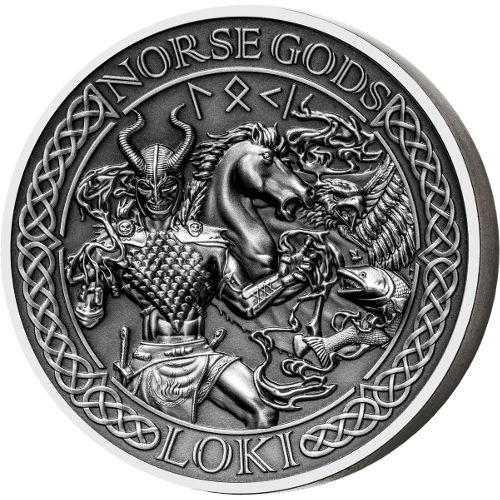 For every well-intentioned god or goddess in mythology, there is one bad seed. When it comes to Norse mythology, Loki was the god that fit that bill. As the sixth release in the Silver Norse Gods Series from the BH Mayer Mint, the Loki Proof Coin highlights one of Norse mythology’s bad boys. Today, the 2016 2 oz Silver New Zealand Norse Gods Loki Proof coin is available on Silver.com.

Norse mythology as enjoyed a revival in interest in Western society in recent years with the release of numerous proof coins series. The BH Mayer Mint’s Silver Norse God program is a nine-coin series featuring reverse designs representing a different god or goddess. The program launched in 2015 with four coins and continues with five more in 2016.

Loki is known as the god of evil and had the power to transform himself into other beings. He was known to transform on a regular basis into creatures such as fish, horses, and birds. Each of these creatures was incorporated into the background design for the Loki proof coin.

On the obverse face of the 2016 2 oz Silver Cook Islands Norse Gods Loki Proof you’ll find the right-profile portrait of Queen Elizabeth II from Ian Rank-Broadley. In use since 1998, this design represents the fourth image of Her Majesty used on currency throughout the commonwealth nations since 1952.

The reverse of the Loki Proof features the imposing figure of Loki, complete with a horned helmet that masks his face. In the background, the design includes a horse, fish, and soaring eagle. The words “Norse Gods” and “Loki” are engraved on this face.

BH Mayer Mint is a privately-owned and operated mint located in Germany. Opened in 1871, it is still run by members of the family with fifth-generation leadership in place more than 140 years after its founding.

If you have any questions, please feel free to reach out to Silver.com. Our customer service reps are available at 888-989-7223, online using our live chat, and via our email address.