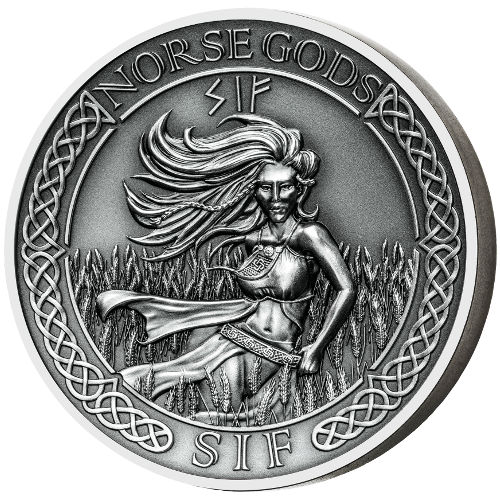 The final coin in the Silver Norse Gods Series is now available from the BH Mayer Mint, and it features a figure that many are probably unfamiliar with. Sif is the wife of Thor, and is well known for her intense beauty. Today, the 2016 2 oz Silver Cook Islands Norse Gods Sif coin is yours to purchase through Silver.com.

With the release of the 2016 2 oz Silver Cook Islands Norse Gods Sif Proof coins, the mint brings the series to a close in a similar fashion to its beginning. The first coin released in 2015 to launch the series highlighted Thor, and now his beautiful wife is the focus of the final coin in the series.

Sif was known more for her immense beauty than her relationship as the wife of Thor. Her long, golden blonde hair reminded many of a bountiful harvest of wheat and grains. In this way, her image was often associated with the occurrence of a good harvest season.

The reverse side of the 2016 2 oz Silver Cook Islands Norse Gods Sif Proof coin features the image of a beautiful Sif, complete with her long locks of blonde hair. Engravings identify the coin series, “Norse Gods,” and her name in Norse.

On the obverse face of the coin you’ll find the familiar portrait of England’s Queen Elizabeth II. Captured in right-profile relief by Sir Ian Rank-Broadley, this depiction of Her Majesty has been in use on British, Australian, and New Zealand coinage since 1998 when it was introduced.

The BH Mayer Mint produced each of the silver coins in the Silver Norse Gods Series with a high-relief striking. Located in Germany, BH Mayer was founded in 1871 and has spent 140 years crafting a reputation for excellence in production and a focus on customer service satisfaction. Today it remains in the hands of its founders under fifth-generation management.

Please direct your questions regarding the Silver Norse Gods coins to a Silver.com associate at 888-989-7223. We’re also available online using our live chat and email features.