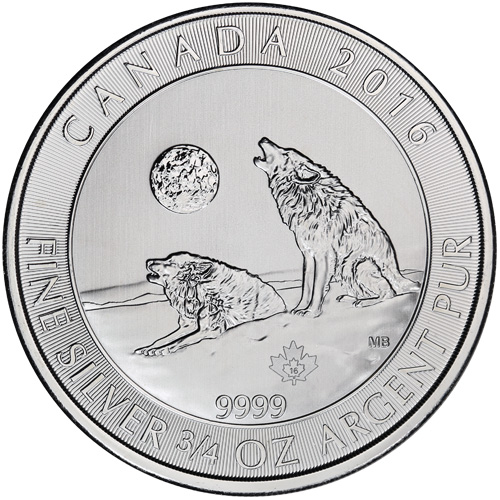 Wolves are one of the most stunning beautiful, and dangerous, animals roaming the North American continent. Though a single wolf is not nearly as dangerous or powerful as one bear, these creatures are ruthlessly smart and tend to hunt in packs, which exponentially increases the danger they pose. Today, the animals are captured on the 2016 ¾ oz Silver Canadian Howling Wolves Coin and available to you online at Silver.com.

On the 2016 ¾ oz Silver Canadian Howling Wolves Coin you’ll find the image of a pair of wolves howling under the night’s moon. Wolves have an eerie howling call that they use to coordinate with other wolves in the pack, letting them know where each other are, but also to help when hunting as a pack to locate prey.

Each of the 2016 ¾ oz Silver Canadian Howling Wolves Coins in this listing is in BU condition. Coins in this condition have no signs of wear and tear, though you may notice minor flaws ranging from breaks in the luster and spotted surfaces to contact marks from the process of striking blanks at the mint during production.

The reverse of the 2016 3/4 oz Canadian Silver Howling Wolves Coin in this listing features a design that focuses on two wolves. The animals are featured with one laying down while the other is sitting down, but both have their heads tilted toward the sky as they let out their ominous howl.

On the obverse of each of these Royal Canadian Mint coins you’ll find the right-profile portrait of Queen Elizabeth II. Her Majesty’s effigy was created in 2003 by Susanna Blunt, and serves as the latest depiction of the monarch to feature on Canadian coinage. It first appeared on Canadian coins the following year in 2004.

We encourage all Silver.com customers to contact us with questions. Our customer service team is available at 888-989-7223, on the web using our live chat, and via our email address. You can see the full range of silver for sale on our website at any time!