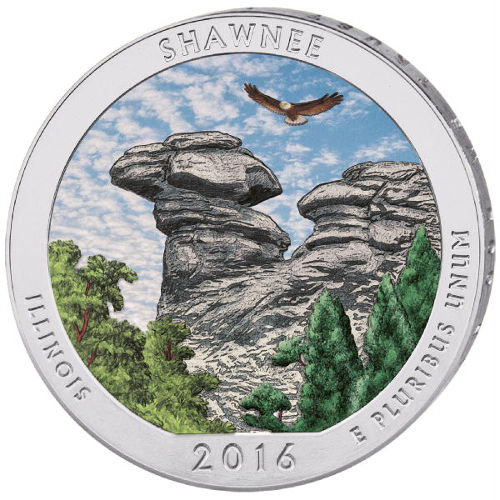 President Franklin D. Roosevelt spearheaded the Civilian Conservation Corps’ efforts to employ Americans during the Great Depression. At this point in time, the area encompassing the Shawnee Hills suffered from deforestation and exhaustion from decades of farming. It was announced as a federally protected region in September 1939, and honors Illinois in the ATB Series.

America the Beautiful is a 56-coin series from the United States Mint honoring national forests, parks, and monuments throughout the country. Each state or jurisdiction appears in the series based upon the timing of its representative park, forest, or monument’s adoption as a federal landmark. The series began in 2010 and is scheduled through 2021, with the earliest parks featured in the beginning of the ATB Series.

On the reverse of this coin you’ll find the image of camel rock within the Shawnee National Forest. This design has been brilliantly colorized to add real-world hues and bright tones to the coin’s design.

The obverse features no changes to the design. The left-profile portrait of President George Washington is depicted on this side, and matches the design used on the American circulation quarter.

America the Beautiful coins are produced by the United States Mint at its Philadelphia Mint or Denver Mint facility. However, these colorized coins were created by Emporium Hamburg in Germany, as the US Mint does not colorize any of its coins.

If you have any questions, please don’t hesitate to ask. A Silver.com associate is available on the phone at 888-989-7223, online using our live web chat, or via our email.