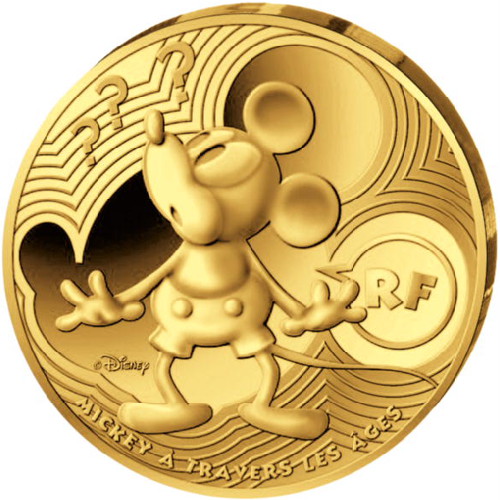 The most famous Mickey Mouse cartoon of all time is, undoubtedly, Steamboat Willie. The first Disney cartoon with synchronized sound, the film introduced the greater world to Walt Disney’s lovable mouse and his girlfriend Minnie. A new collection of coins is now available online at Silver.com, including the 2016 5 oz Proof Gold French Mickey Mouse Through the Ages Coin.

Mickey Mouse was Walt Disney’s first major icon, but his original drawings and films were blocked by Disney himself. After a test screening of the animated short Plane Crazy, Disney held off distribution because he wanted to be able to produce the first sound-synchronized animated short.

In 1928, Mickey would make his first big debut in the animated short Steamboat Willie. This iconic short film remains a paramount moment in the history of Walt Disney, establishing an empire that would eventually generate billions of dollars around the globe each year.

In this 2016 5 oz Proof Gold French Mickey Mouse Through the Ages Coin you’ll find imagery reflective of Mickey Mouse from Plane Crazy. Originally created and screen tested in 1928, the film wasn’t distributed until 1929 because the original animated short was a silent film depicting Mickey as he tried to mimic Charles Lindbergh’s transatlantic flight.

On the obverse of the Proof Gold French Mickey Mouse Through the Ages coin is the image of a quizzical Mickey Mouse, as first seen in Plane Crazy. The film didn’t test well originally because it was a silent film, but when it was re-released in 1929 in sound it took off.

The reverse of all 2016 5 oz Proof Gold French Mickey Mouse Through the Ages coins includes the same design featured on all five coins in the collection. The iconic right-profile portrait of Mickey Mouse is captured in brilliant gold relief, with engravings of the face value, year of issue, and Mickey’s name.

All 2016 Proof French Mickey Through the Ages Coins are a product of the Monnaie de Paris, the official sovereign mint of the French government. Previously tasked with the production of Francs, today the mint strikes Euros for the French economy in the European Union.

Please don’t hesitate to contact Silver.com if you have any questions. Our customer service department is available on the phone at 888-989-7223, or you can connect with us online through our live chat and email features.