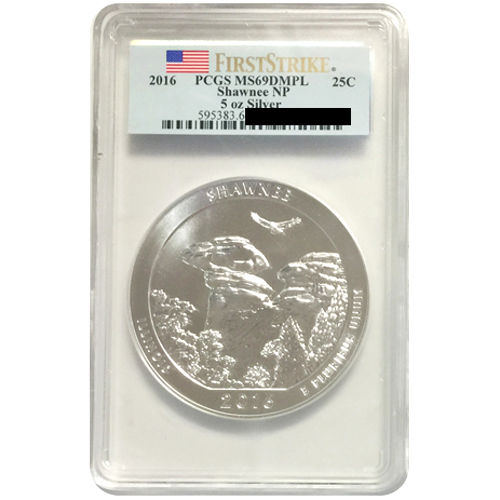 Formed during the Illinoisan Stage of North America’s history, many of the rock formations in Illinois were crafted by the retreat of the Laurentide ice sheet between 352,000 and 132,000 years ago. As the ice sheet receded, once covering 85% of Illinois, it left behind impressive rock formations such as camel rock in Shawnee National Forest. This image is captured perfectly on the reverse of the 2016 5 oz Silver ATB Shawnee National Forest coin, available on Silver.com.

Shawnee National Forest was established as a federally protected area by the administration of President Franklin D. Roosevelt, however much of the land in the forest was added by federal purchases over the course of the 1930s and 1940s.

America the Beautiful is a 56-coin series from the United States Mint meant to celebrate the nation’s parks, forests, and historic monuments. Introduced in 2010, there are five new coins released annually.

The 2016 5 oz Silver ATB Shawnee National Forest coins available to you today have Mint State 69 grades from the PCGS. This indicates a coin with full, original luster and a maximum of two minor detracting flaws. Deeply-mirrored reflects the finish found on the background fields of the coins in this listing.

On the reverse you’ll find the image of Shawnee National Forest. Camel rock rises upward from the forest floor, and you can see a bald eagle flying over the cliff of the rockface. Engravings include the state of issue, park, and the year of issue.

The obverse of all America the Beautiful quarters features the same design found on the nation’s circulation 25-cent pieces. The left-profile portrait of President George Washington was created in 1932 and released into circulation that same year, where it remains today.

Silver.com encourages all shoppers to contact us with questions. You can reach a Silver.com associate on the phone at 888-989-7223, online using our hosted live web chat, and by sending us an email with your questions. Check out our full selection of Silver Bullion to see similar products.